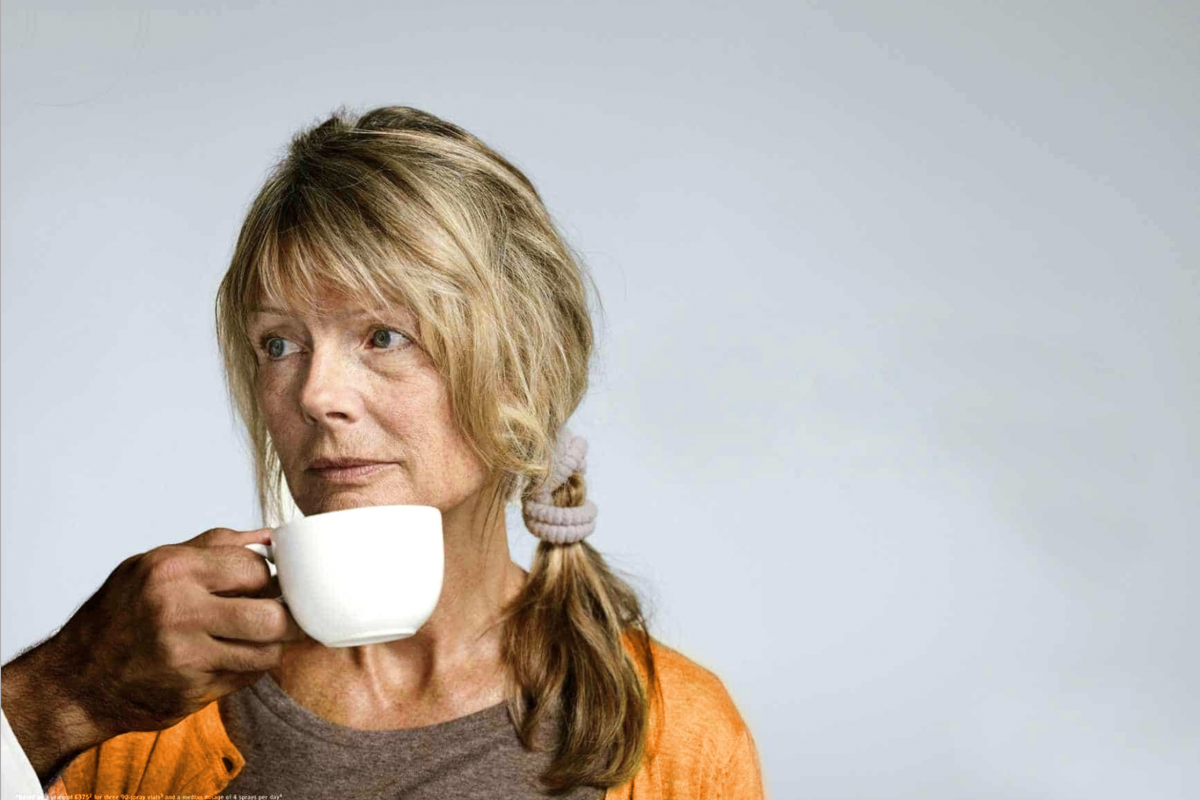 Do you or someone you know suffer from Dietary Dogmatic Asshole Complex (DDAC)?  Answer the following questions to find out if you suffer from DDAC, and what can be done to improve your relationships, health, and overall understanding of diet, science, and people:

•  Do you often give unsolicited advice about other people’s food choices?
•  Do you believe that the rest of the world should be on your exact diet?
•  Do believe there is only one right way to do your particular diet?
•  Do you believe that people who don’t eat the same diet as you are ‘bad’ or ‘stupid’?
•  Do you often say things in the same vein as “That’s not Paleo?” or “That’s not Keto?”
•  Do you say things like “You know carbs are bad for you, right?”
•  Do you often feel the need to correct others, but give no resources to back up your claims?
•  Do you sometimes find yourself judging friends or family for eating foods that you don’t eat?
•  Do you find that you’ve alienated your friends, and now your new friends are slightly ‘cultish’?
•  Do you ignore studies that suggest that a diet other than your diet can be beneficial?
•  Do you ignore studies that describe the adverse effects of your diet?
•  Have you developed an eating disorder to prove the superiority of your dietary dogma?
•  Does your diet cause you to gain weight or feel miserable, but blame it on other life factors?
•  Do you label macros like fat, carbs, or protein as “good” or “bad” when discussing your diet?
•  Do you often discredit the diet of others, even when their health consistently improves on it?
•  Do you have a social following from suggesting that other diets are “stupid”?
•  Do you always speak of your opinions on nutrition as though they are undoubtedly correct?
•  Do you derive a sense of superiority from your diet?
•  Do you derive a sense of importance from being elitist about your diet with others?
•  Do you need to punish yourself for breaking a set of strict self-imposed dietary rules?

If you answered ‘yes‘ to any of these questions, you might be suffering from Dietary Dogmatic Asshole Complex (DDAC).  DDAC is a common type of egotistical myopia, where sufferers of this complex chronically overestimate themselves and their knowledge of a subject coupled with an inability to recognize their limitations as it relates to understanding the infinite needs or goals or differences between themselves and other people.

Observational research suggests that this overestimation and inability to recognize the merit of other paradigms or dietary modalities among DDAC sufferers may explain the common inability to account for nuances, cultural differences, and one’s own lack of information, as well as behavioral patterns such as herding and bunching in pseudo-elitist circle-jerks and rarely interacting with those who disagree.

DDAC is highly correlated with the upper-most point of the Dunning-Krueger Effect, a “cognitive bias in which unskilled individuals suffer from illusory superiority, mistakenly rating their abilities much higher than is accurate. This bias is attributed to a metacognitive inability to recognize their [own] ineptitude.  Similarly observed in the population of DDAC sufferers is a marked inability to recognize that the possibility that they may be incorrect about their assumptions, knowledge, or that their dietary dogma even exists.  DDAC is very common, and most people who have identified with a “food tribe” will have suffered from DDAC at some point in their lifetimes.

However, extreme cases of DDAC may persist in some individuals for several years, a phenomenon which is remarkably correlated with e-fame which may suggest that socio-pathological or compulsory underpinnings of the disorder may be involved.   Fortunately, this intellectually debilitating complex has a 3 step process for a full recovery.

•  Step 1:  Worry about your own goddamn plate.

•  Step 2: Embrace self-doubt. It is positively associated with increased competence over time.

•  Step 3: Make friends with smart people who disagree with you.

Side effects of taking these critically important first steps to recover from DDAC will immediately result in being less of a judgmental cocksock, in tandem with feelings of acceptance of one’s own limitations.

After overcoming Dietary Dogmatic Asshole Complex, you will inevitably discover that varying dietary modalities work for various people for various reasons, and you will have newfound freedom to discover the nuances and mechanisms for why other modalities may work, without the hindrance of having to validate your own sense of self-righteousness all the time.

While this can be an astonishing and empowering realization and transformation, overcoming DDAC is not for everyone, as other less desirable side-effects are commonly experienced post-DDAC treatment.

Common Side Effects Experienced During DDAC Recovery Include: Sudden and apparent social ostracization from others suffering from DDAC.

Feelings of uneasiness while attempting to establish contact and befriend people who you once considered “the Enemy.”

Feelings of mild to severe guilt for taking your dogma far too seriously after realizing what a judgmental, overzealous douchenozzle you once were, as you slowly creep down the curve of the Dunning-Kruger Effect scale.

Symptoms of feeling like a total twatstick and know-nothing may persist for several years or even decades. However, most recovering DDACs adjust to feelings of being totally human, accepting and open to being wrong, and caring about things that actually fucking matter within 18-36 months.

Other Common Side Effects of Recovering From DDAC May Include:

•  Inviting criticisms for your current opinions.
•  Selecting information from various ‘warring’ dietary ‘tribes.’
•  Development of interest in controversial, yet effective works like that of Walter Kempner.
•  Appreciation for differences, yet similar benefits reported among high-carb Kitavans and low-carb Maasai.
•  Disdain for “diet gurus” who maintain the superiority of their diet,  yet do not show consistent improvements.
•  Disdain for your own previously authored posts, books, and articles, and overall behavior.
•  Sharp development of critical thinking skills as nuance becomes more important to you.
•  Recognition that various cultural practices result in different diets.
•  Recognition that your diet as an individual does not need to be reflected by the rest of the world.
•  Recognition that your dogma may have been both elitist and culturally insensitive.

Have You Lost Someone you love to Dietary Dogmatic Asshole Complex?

If you or someone you love suffers from Dietary Dogmatic Asshole Complex, they are not alone. While most forms of DDAC are typically mild, some of the more severe forms may lead to the development of an eating disorder to promote a specific form of food jihadism.

If you suspect a friend has a more severe form of DDAC that may have developed into an eating disorder such as Orthorexia Nervosa, suggest that they speak with their primary care physician immediately, as this is a serious medical and psychological concern.

While no medications are currently available to treat Dietary Dogmatic Asshole Complex, together we can reduce the complex by following the three clinically-proven treatment steps, and by simply sharing this post with your mouth-breathing friends and family who suffer from DDAC. 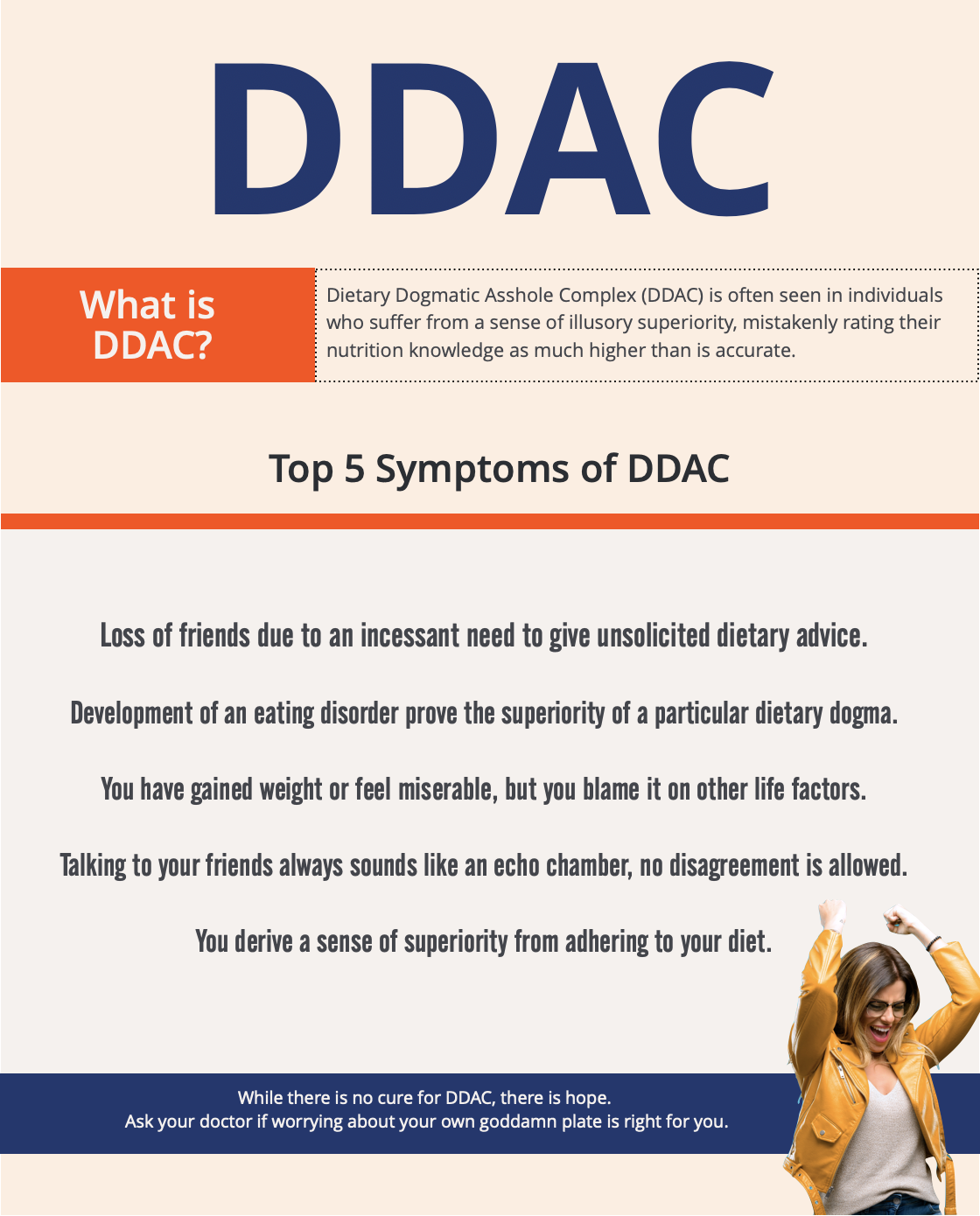