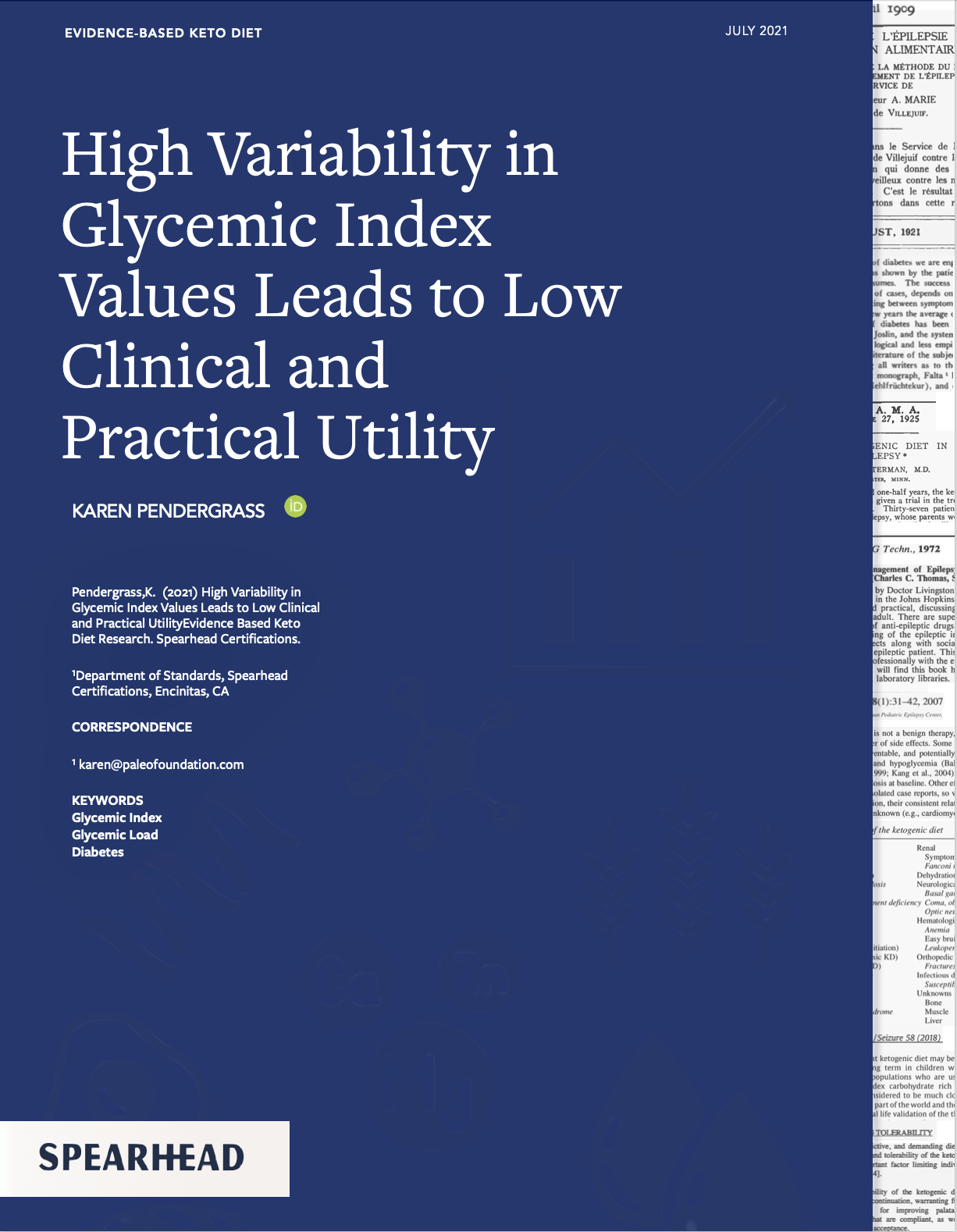 The FAO/WHO Report on Carbohydrates in Human Nutrition suggests that the concept of the Glycemic Index (GI) provides a useful means of selecting the most appropriate carbohydrate-containing foods for the maintenance of health and the treatment of several disease states. However, since its publication,  the increasing limitations of the GI and GL concepts have become far more apparent, as more recent findings suggest that GI values are an unreliable indicator even under highly standardized conditions, and are thus unlikely to be useful in guiding food choices.

The glycemic index (GI) is a measure of how quickly foods raise blood sugar levels. Controversially, the utility of GI values in chronic disease management remains debatable. Although absolute determinations are known to vary among individuals with diabetes, there has been little data on accuracy and variable sources between healthy adults-therefore making reliable conclusions difficult to produce. However, new studies suggest significant individual and intra-individual variances in how individuals respond to a single food challenge suggests that GI value determinations may not be the correct approach for guiding food choices [1].

The glycemic index (GI) is a tool for rating the effect of carbohydrate-containing foods on blood sugar. Jenkins et al. proposed this method to classify food by how they affect your postprandial glucose levels, or how much certain carbohydrates increase in your bloodstream after eating them. The GI measures an incremental area under the curve and then expresses it as a percentage [2].

Glycemic load (GL) is a concept that was originally developed as a food selection guide for diabetic individuals to improve their glycemic control by classifying foods into low, medium, and high GI categories. However, the use of GI has gone beyond this original intent and it’s now being endorsed for use as a labeling tool in order to help reduce chronic disease risk or serve as a basis behind many popular diets such as South Beach Diet or Ketogenic Diet. While there is some data to support some benefit of adhering to a low Glycemic Index and Low Glycemic Load diet in the management of diabetes, data is mixed in its utility for a nondiabetic population [3].

Plans to develop a universal measure for food GI, GL was abandoned in 2008 due to inconsistencies with previous research [4]  Statistical analyses show an inconsistent relationship between dietary carbohydrate content or glycemic index values and insulin sensitivity [4]. In addition, data from randomized clinical trials indicate inconsistent relations between these two variables and cardiovascular disease [5, 6] weight loss [7, 8], and cancer [9, 10].

The GI value is considered to represent the inherent property of the food and not the metabolic response of an individual to the food. As such, theoretically, GI values should be wholly reproducible within and among individuals. However, a review of the published GI tables, which is a compilation of the GI values of individual foods generated by several laboratories [11, 12] indicates remarkably different estimates for the GI value within a category and even for the same food [13, 14, 15]. This could result in a food being ranked as low GI by one laboratory and high by another [16], further elucidating the issue of using GI for a specific food as a universal measurement.

While GI was one of the most important concepts in nutrition science, many studies have shown that it might not be reliable because there can often be a large variation across people’s responses even when following recommended methodology for testing. One study found an intra-individual CV (20% deviation) and an inter-individual CV (25% deviation). While addressing methodologic variables did improve these CVs slightly, they still didn’t reach what would typically be considered acceptable limits by biomedical researchers (~5%) [1].

Of the variables accounted for, only 5-11% of the variability could be accounted for by age, BMI, TC:HDL cholesterol ratio, serum triglyceride, and CRP concentration. Data suggests that insulin index and Hba1c could account only for 15 and 16% of the inter-individual variability, indicating that glycemic status can alter the GI status even in healthy individuals [1]. This high variability suggests an even higher risk of misclassifying food types and an even more significant limitation to clinical application as an accurate or universal measure for foods. While studies have identified several methodologic factors that could account for GI values’ variability, efforts to address these concerns have not yet been successful [15–17, 1].  In light of these concerns, this has led to the recommendation that GI values be determined in normoglycemic individuals. Unfortunately, data suggests that glycemic status still posed a significant issue in the context of GI value variability, even among normoglycemic individuals [1].

Effectively, data indicates that substantial variability exists in the GI values of white bread, despite standardized methodology and multiple testing. The high degree of variability in the GI values underscores significant potential to misclassify foods into one or more categories based on their GI values (low, medium, and high). The implications of these findings on Glycemic Index estimates and their associations with chronic disease risk warrant major reconsideration for their clinical utility.

Ranking meals by GI has been performed by adding the GI values of food components, but whether the sums of GIs can reliably calculate a meal’s value is controversial. In one study, researchers used GI values taken from the International Table of GIs to predict the GI of 13 simple breakfast meals. However, when they tested these predictions against measured results, no association was found between calculated and actual measurements [18]. Other studies found a closer relationship between calculated GI and glycemic responses to various breakfast meals, but not all of the relationships were predictable [19].

Other studies found that the ingestion of milk with rice resulted in a significantly lower GI than when rice was eaten alone [20] while another found that when cheese was added to a potato, the potato’s mean7s.e.m, dramatically reduced by 57.6% from 9378 to 3975 [21].

Data also suggests that combinations of foods can markedly reduce the GI values while adding proteins and fats to a carbohydrate meal can significantly reduce glycemic responses [22, 23]. Thus, it is clear that aggregating the GI values of individual components of a meal does not accurately predict the observed GI of the meal as a whole.

The FAO/WHO Report on Carbohydrates and Human Nutrition of 1998 suggested that the concept of GI values provided a means of selecting foods for health and disease prevention. The report notes three ways to use this information: 1) understanding how diet affects individual blood glucose levels, 2) choosing carbohydrates that can supply sustained energy without inducing glycemic responses or weight gain, and 3) avoiding dietary patterns leading to insulin resistance and increased risk for obesity [24].

However, since its publication in 1998, the increasing limitations of the GI and GL concepts have become far more apparent, and the severity of the limitations associated with GI and GL values underscores the need for further research on the concept to obtain more accurate estimated values for foods and meals. Further, other factors must be considered when establishing associations between diets or foods based on GI and chronic disease outcomes. Correlations observed between food choice and disease risk may also be confounded by behaviors related to food choices such as physical activity, calorie intake, and other dietary components.

Nevertheless, while inaccuracies in GI and GL values abound between individuals and inter-individually, they may still have utility in glycemic control in diabetic patients. However, extreme caution should be taken when food choices are based solely on GI and GL values, as many low GI and GL foods or meals may be calorically dense but contain unhealthy amounts of fatty acids that are known to contribute to poor health outcomes.  A better understanding of the mechanisms behind how different foods affect glycemic responses would help improve our ability to predict these effects accurately. Until then, patients with diabetes and other metabolic conditions should consult a dietitian to help develop appropriate meal plans.

Quoting the lead author of a recent study entitled  “Estimating the reliability of glycemic index values and potential sources of methodological and biological variability” published in the American Journal of Clinical Nutrition, Nirupa Matthan, Ph.D., scientist in the Cardiovascular Nutrition Laboratory at the USDA HNRCA says, ”Based on our results, we feel strongly that glycemic index is impractical for use in food labeling or in dietary guidelines at the individual level.  If your doctor told you your LDL cholesterol value could vary by 20% (i.e., a difference between normal vs high risk), I don’t think many people would find such an issue acceptable” [25].