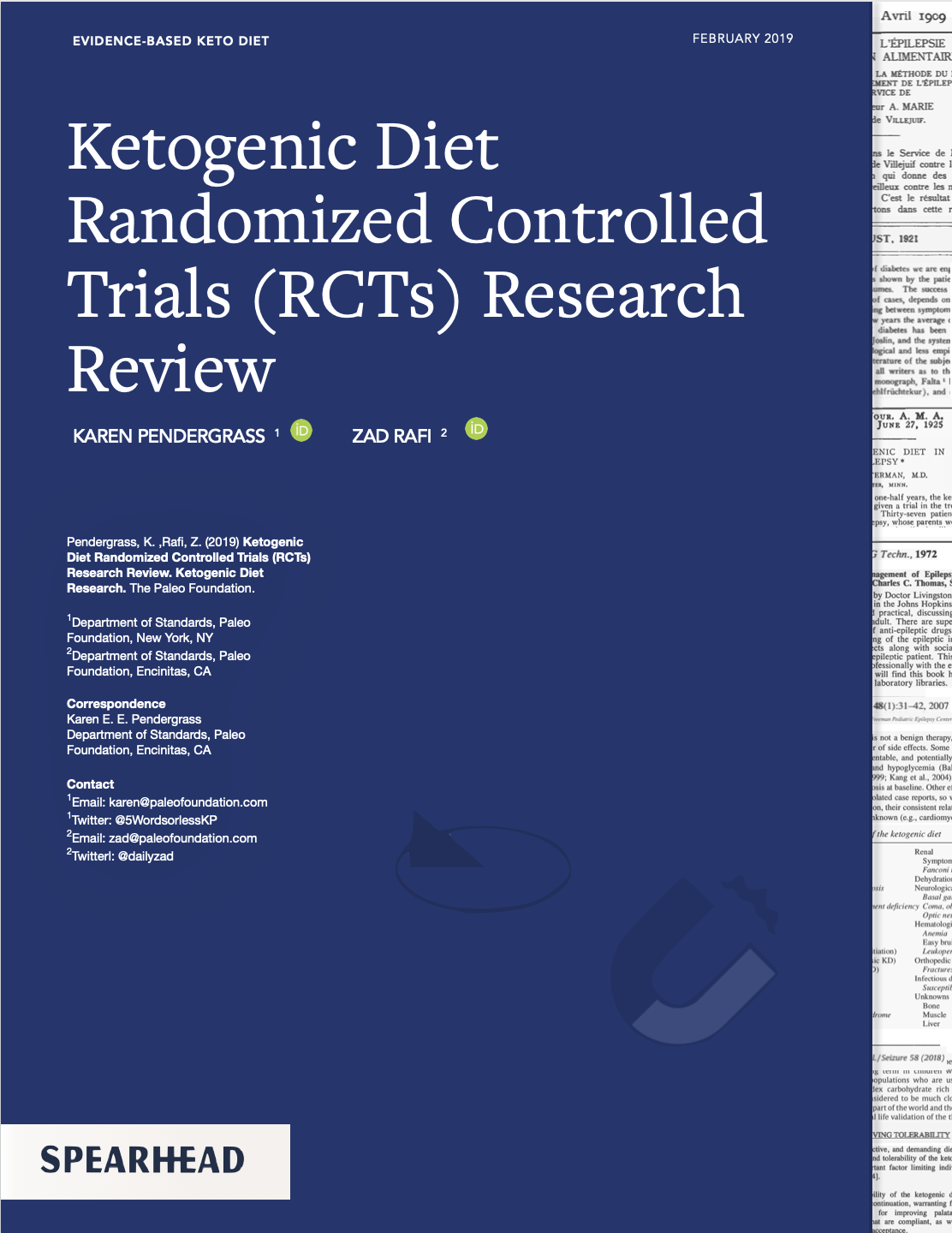 ’Food is medicine’ is an ancient, yet still relevant concept that perfectly illustrates the exploration and findings of the ketogenic diet and its effect on human metabolism.  The use of the ketogenic diet in treating epilepsy has been well established for many decades.  However in more recent years, an increasing amount of evidence suggests that various ketogenic diets have a therapeutic role in other disease states as well, but also a grave potential for adverse effects.

Classical ketogenic diets are characterized by a reduction in carbohydrates usually to less than 50 grams per day,  and a relative increase in the proportions of protein and fat. The knowledge that has been accumulated in the past century in regards to the metabolic effects of classic ketogenic diets began with the need for a better alternative to starvation diets to treat epilepsy.  However in more recent years, an increasing amount of evidence suggests that ketogenic diets have a therapeutic role in other disease states as well.  The positive results of these studies demonstrate the importance of this direction for research, as a ketogenic diet intervention may aid in reducing the reliance on pharmaceutical treatments, or provide adjunctive treatments which have both positive economic and social implications.

While the amount of data regarding the influence of nutrition on health status and disease prevention accumulates, there is also a need to move the needle more by way of improving the availability of information to those in both a clinical sense, and to others who are responsible for the dissemination of information about ketogenic diet nutrition.  As such, in this ketogenic diet research review, we examine the 32 available randomized controlled studies involving the ketogenic diet and their findings, as well the potential clinical utility of the ketogenic diet in other disorders, and potential adverse effects.

The hormone insulin activates key enzymes in metabolic pathways which store energy derived from carbohydrates.  When an absence or scarcity of dietary carbohydrates occurs, a subsequent reduction in insulin levels lead to a reduction in lipogenesis (the metabolic formation of fat), and fat accumulation.  After a few days of drastically reduced carbohydrate consumption (below 50 grams/day), glucose reserves become insufficient for fat oxidation and are therefore unable to supply glucose to the central nervous system.  However, the central nervous system cannot utilize fat for energy, and after 3–4 days without carbohydrate consumption, the central nervous system is ‘forced’ to find an alternative energy source, leading to the increased production of ketone bodies acetoacetate, β-hydroxybutyric acid and acetone in a process called ketogenesis, occurring principally in the mitochondrial matrix of the liver.

Ketogenesis occurs during periods of  prolonged fasting, in type 1 diabetes, and in individuals following high-fat/low-carbohydrate diets.  The main ketone body produced in the liver is acetoacetate, but the primary circulating ketone is β-hydroxybutyrate.  Under conditions of adequate dietary carbohydrate intake, free acetoacetic acid is typically low, and rapidly metabolized by various tissues such as the skeletal and heart muscles. However, in conditions where acetoacetic acid is overproduced, it is converted to the other two ketone bodies leading to the presence of ketone bodies in the blood and urine that act as an alternative metabolic substrate to glucose, supplying energy to the central nervous system.

It is important to note that ketosis is a completely different physiological mechanism than it’s similar-sounding pathological counterpart ketoacidosis, which is seen in individuals with type 1 diabetes. In physiological ketosis which occurs during very-low-calorie or low carbohydrate ketogenic diets, ketone concentrations reach maximum levels of 7/8 mmol/l and do not go higher because the central nervous system must use these molecules for energy in place of glucose. Subsequently, there is no change in pH.  However, in uncontrolled diabetic ketoacidosis, ketone concentrations can exceed 20 mmol/l while lowering the blood pH which can be very dangerous.

HISTORY OF THE KETOGENIC DIET

In biblical times and in the times of Hippocrates, the Greek ‘father of medicine’,  fasting was used as a means to treat epilepsy, but remained poorly understood for millennia.  Before the understanding of the mechanisms of fasting, physicians also used starvation clinically to treat epilepsy.  The following is a brief history of how food deprivation as a treatment for epilepsy unfolded in the 1920s into the use of the ketogenic diet for epilepsy as we know it today.

Dr. Guelpa and Dr. Marie: French physicians who authored the first scientific report on the value of fasting in epilepsy in 1911. Marie and Guelpa described a cyclical fasting regimen of four days of fasting and purging, followed by four days of a restricted vegetarian diet. [1].

Bernarr Macfadden:  A physical fitness guru/cultist who believed that any disease could be cured through exercise and fasting. This included asthma, diabetes, prostate cancer, impotence, paralysis, liver and kidney disease, as well as epilepsy [3].

Dr. Hugh W. Conklin: An American osteopathic physician and assistant to Macfadden who adopted Macfadden’s beliefs and methods of fasting to treat his patients with epilepsy.  His impressive and positive results drew attention from other pioneers [4, 5].

H. Rawle Geyelin: An American endocrinologist who was the first to report his use of fasting as a treatment for bromide and phenobarbital-resistant epilepsy to the American Medical Association (AMA) in 1919 [6].  Geyelin was most interested in discovering the mechanisms that made fasting such an effective treatment for epilepsy [7].

Dr. A. Goldbloom: A Canadian physician (and skeptic of Dr. Conklin) who treated patients with fasting, but noticed that when the fasting period ended, the seizures returned for some.  He wrote, “It would seem from this case that the starvation treatment is effective only while it is continued and while the patient remains in bed, but that it has no enduring qualities [8]. “

HTH: A boy who had grand mal seizures that were treated with fasting who was initially presented to the AMA convention by Dr. Geyelin.   HTH was placed on a “Water Diet” fast for 3-4 weeks to treat his epileptic seizures. During the fasting period, his seizures disappeared.  However, his seizures returned after the conclusion of the fast as Dr. Goldbloom suggested they might.  Luckily for the boy and for the rest of the world with epilepsy, HTH was the nephew of pediatric physician Dr. John Howland, and son of a very wealthy Charles Howland [9, 10].

Dr. John Howland: Professor of pediatrics at Johns Hopkins, and director of the Harriet Lane Home for Invalid Children.  In 1915, his brother Charles Howland donated five thousand dollars (the equivalent of more than $120,000 today)  to support research on the mechanisms of fasting in the treatment of epilepsy due to worries of his son HTH’s intractable seizures that were not cured with starvation by Dr. Conklin [ 11, 12 ].

Dr. Stanley Cobb and W.G. Lennox:  Dr. Stanley Cobb was an associate professor of neuropathy at Harvard and physician who was in the audience during the presentation given by Geyelin to AMA. He and his colleague Lennox were enlisted by the parents of HTH and Dr. John Howland in to further study the mechanisms of fasting on epilepsy [9].  Cobb and Lennox conducted several studies on fasting and had reported several significant findings, noting that levels of the ketone bodies β-hydroxybutyrate, acetoacetate, and acetone are elevated in the peripheral blood and in the urine [10].

R.T. Woodyatt:  Diabetes Researcher in 1921, around the time of the studies of Cobb and Lennox, authored a review article about dietary manipulations for diabetes stating that acetone, acetic acid, and beta-hydroxybutyric acid (BHB) appears in subjects via fasting, or via a diet containing too low a proportion of carbohydrate and a high proportion of fat [13]

Dr. Wilder: Physician from the Mayo Clinic who originally coined the term “Ketogenic diet.” [17]  Based on the work by Woodyatt and Geyelin, Wilder proposed that the benefits of fasting could be obtained if ketone bodies had been produced by other means, such as eating a diet that was rich in fat and low in carbohydrate [14].

Wilder was the first to suggest that the ketogenic diet may be as effective as fasting, and could be maintained for an extended period to compensate for the disadvantages of prolonged fasting periods. The following day in 1921 after his proposal, a report was issued describing the success in seizure control of three patients of the Mayo Clinic using a ketogenic diet as a treatment instead of fasting.

In 1924, The Mayo Clinic began treating adults with epilepsy with the revolutionary “ketogenic diet.”  [15–17].

While some studies may detect associations between an intervention and an outcome, it can be difficult to rule out the possibility that the association was caused by another unknown factor.  However, the randomization that occurs in Randomized Controlled Trials (RCT) reduces the possibility of systematic errors, and are the most rigorous way of determining whether a cause-effect relation exists between treatment and outcome, and the extent to which specific, planned impacts are being achieved.  RCTs are quantitative, comparative, controlled experiments in which a group of investigators study two or more interventions in a series of participants who are allocated randomly to each intervention group with  several important features, such as:

•  Neither the patients nor the trial conductors are aware of which treatment was given to which patients until the study has completed.

•  Intervention groups are treated identically except for the experimental treatment.

•  Patients are analyzed within the group that they were allocated, whether they experienced the intended result or not.

•  The analysis of the results focuses on estimating the effect size between different groups.

While many published studies have investigated the ketogenic diet RCTs are the most stringent way of determining whether a cause-effect relation exists between the intervention and the outcome  For this reason, this research review will focus on the outcomes of these types of studies.

In 2017, the CDC reported that more than 100 million Americans, or 1/3 of the US population had pre-diabetes or diabetes, and was the leading cause of death in 2015.  Worldwide, diabetes affects more than 422 million people and is the leading cause of blindness, kidney failure, heart disease, and stroke. Clearly, diabetes is a serious health problem, but it can often be managed through physical activity, diet, and medication [18].  The findings of the reviewed studies suggest that the ketogenic diet may improve symptoms of Type II Diabetes.

Findings: Individuals with type II Diabetes improved glycemic control and lost significantly more weight after they had been randomized to a very low-carbohydrate ketogenic diet and lifestyle  program compared to a conventional low-fat diabetes diet program [19].