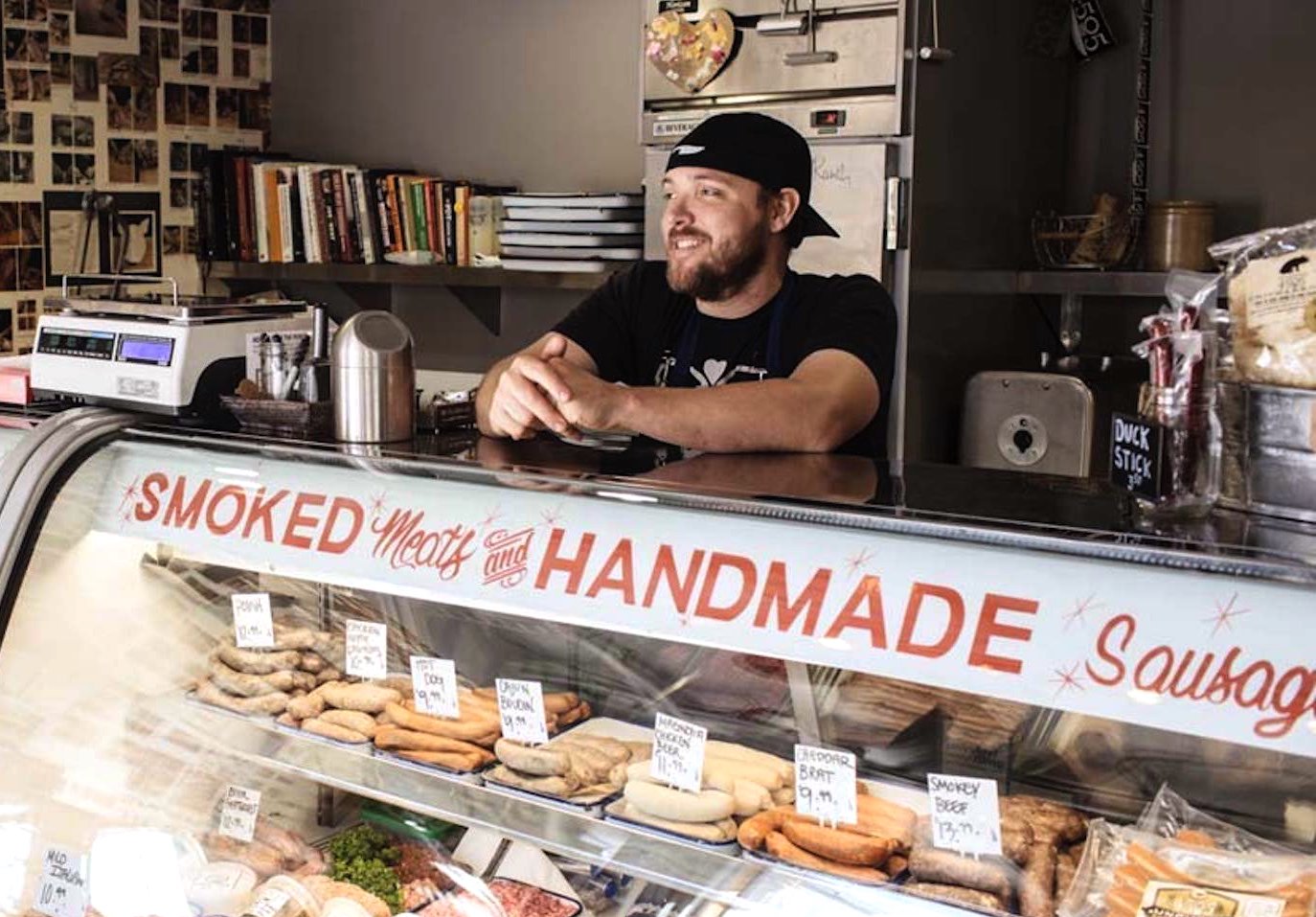 When we think about food waste, most people probably have images of old leftovers growing mold in our fridges, or a picky child whose half-full plate of food eventually gets thrown away. Consumer-level waste certainly plays a role in the enormous amount of food waste that enters landfills and contributes to around 6 percent of total greenhouse gas emissions, mostly in the form of methane emissions at landfill sites. However, the Food and Drug Administration (FDA) estimates that food waste makes up between 30 and 40 percent of the total food supply. This massive amount of waste occurs not only at the dinner table, but also in the farm field, in processing facilities, during transportation, and elsewhere along the increasingly long and complicated supply chains that characterize the industrial food system.

In the specific case of meat and animal products, the U.N. Food and Agriculture Organization finds that of the 263 million tons of meat produced globally, over 20 percent is lost or wasted. Much of that waste occurs at slaughterhouses or massive processing facilities around the world where it is simply cheaper and more efficient to discard parts of the animal that are not popular with consumers searching for a good steak in the meat department of their local grocery store.

Ryan Farr, originally from Kansas City, Missouri, eventually made his way to the west coast where he made a name for himself in the kitchens of exclusive San Francisco area restaurants such as Fifth Floor and Orson. While working in the kitchens, he found that there were a number of challenges to sustainably sourcing certain cuts and parts of the animals that he wanted to work with as a butcher and chef.

“It was hard to know where (the meat) would be coming from, so I started working with whole animals that I could source directly from farms,” Farr says in a recent interview. After over 15 years of working in restaurants in the Bay Area, Farr and his wife decided to leave the restaurant world and work with a non-profit organization. During this transition, Farr was looking for ways to make a little bit of extra money to reliably make his rent payments and prepare for the arrival of his first child. A load of pigskin taking up space in his refrigerator led him to start making and selling chicharrones and cracklings, also known as pork rinds. He would sell his signature pork rinds to neighbors and friends, and also marketed them with local bars and restaurants in the area of San Francisco where he lived.

“My background is as a chef and a butcher, and I am really into whole animal utilization,” Farr says. As a chef, I got sick of throwing away the (pig) skin, and (making pork rinds and chicharrones) was a great way of utilizing the waste.”

At the same time, Farr also began using his butchery skills to host butcher parties and classes. “We were doing all these things around whole animals and didn’t know what to call ourselves, so the next natural progression was 4505 Meats,” he says.

Today, 4505 Meats sells a variety of Paleo and Keto Certified pork rind snack products. Their chicharrones are made from cuts from the pig’s back and belly and are marketed as a great no-carb crunchy snack as well as a unique ingredient to liven up just about any dish you can think of. The company sells on several online marketplaces, including Amazon, Thrive Market, and Vitacost. Their “crispy clouds of porkaliciousness” are also soon to be released at Whole Foods Markets.

Chicharrones or pork rinds have long been associated with the diet of country farmers and the Latino population. However, as millions of people began to become interested in low carb diets, pork rinds were seen as a desirable crunchy snack alternative to potato chips. Much of the pork rind industry is dominated by industry giants who purchase pork skins removed by mechanical skinners from massive meatpacking companies in 20 ton lots. Chicago-based Evans Food Group, for example, processes over 100 million pounds of raw pork skins in a given year. Not exactly what you’d consider an artisanal butchery process.

“If you’ve never had our chicharrones, you might have a bad taste in your mouth from eating pork rinds in the past,” Farr says, “so getting people to understand that pig skin can be a beautiful thing did take some initial effort.” After close to a decade on the market, however, the demand for 4505 Meats Chicharrones snacks has outpaced his need for the other parts of the pig. While the exact recipe for 4505’s Chicharrones is kept a secret, Ryan Farr does admit to using a special type of oil, which makes them extra crispy.

Farr and 4505 Meats pride themselves on only using quality ingredients crafted with care. They source their pig skins exclusively from a collective of small family ranches and farms in California that practice sustainable and humane husbandry techniques. This focus on short and direct supply chains obviously plays a huge role in the taste and quality of the end product as well.

Before the arrival of Europeans and the subsequent American colonists, the Great Plains held as many 60 million heads of buffalo and were the central aspect of Native American livelihoods. Early European adventurers report seeing solid herds of buffalo expanding up to twenty miles into the horizon. A couple of centuries later, however, those herds had been reduced to less than 1,000 living specimens and were on the brink of extinction.

Unlike the American pioneers who slaughtered the buffalo for a quick meal, for sport, or as part of a wider strategy to force the original populations off their ancestral land, the Native American nations of the Great Plains had developed an intricate and prudent economy that utilized the entire buffalo. Besides being the main source of food, dried buffalo dung was often the main source of food on the treeless prairies, often being burned to create large stores of pemmican (dried buffalo meat) to provide food through the long cold windows.

Native American communities also used buffalo bones for making knives and even boiled the bones to create a type of glue. The marrow from the bones provided another nutrient-dense source of food. The skins dried and cured for use as tipis, clothes, moccasins, bedding, saddle covers, and water-bags. The horns and hooves were made into cups and bowls while the sinews were important for bowstrings and threads. The extracted buffalo fat was the main source of soap, and even the rough tongue of a buffalo could be used as a hairbrush.

This sophisticated butchering process was not only incredibly practical and judicious, but it also demonstrated an intricate and close connection to the animals upon which their livelihood depended. Nothing could be further from the reality of today, where cattle (which replaced the buffalo herds) are raised on imported grain, kept in filthy concentrated animal feeding operations, and are machine-slaughtered in highly efficient operations before being shipped to consumers who have zero relationship to the animal.

For Ryan Farr, consumers are beginning to demand a return to a more prudent, resourceful source of butchery. While there has been much focus on pasture-raised meat and free-range poultry, the slaughtering process is often less-discussed amongst health food advocates. Educating people about humane, whole animal butchery is another of Farr´s passions.

“Suddenly people really care about what they put in their bodies; it’s about where it comes from, not what [part of the animal] it is. Everybody’s excited to be learning more about things like pig skins and pig hearts and buffalo testicles,” Farr says.

While most people are probably not going to be making their own cow-hide moccasins, interest in learning about humane, whole animal slaughter and processing is growing. For over a decade, Farr has offered whole animal butchering classes where, for a $75 fee, people could enjoy a hands-on process of turning a 90-pound pig into delicious pork chops, roasted pork head, and of course the signature chicharrones that are Farr´s specialty.

Farr has also published a complete book titled “Whole Beast Butchery: The Complete Visual Guide to Beef, Lamb, and Pork,”  a visual manual that includes 500 step-by-step photographs, master recipes for key cuts, and a primer on tools, techniques, and meat handling. “Knowing where your meat comes from is important. Knowing the person [who] cuts it is also important. Respect for the animal and the farmers is easier to attain this way”, he says.

Whole animal agriculture and butchery is a fundamental part of rediscovering our connectedness to the foods that sustain us. While Farr and the folks at 4505 Meats certainly believe in this mission, they also agree that delicious taste is equally important in helping people discover the richness of sustainably-sourced and butchered animals. Their website proclaims that “from 4505’s very beginning when Ryan Farr started selling Chicharrones at the Farmer’s Market, we have strived to keep it simple and always follow our stomachs.” 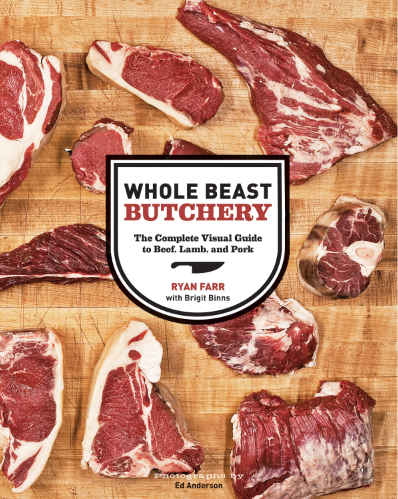