A Pleistocene Vision of the Past Offers Direction for the Future 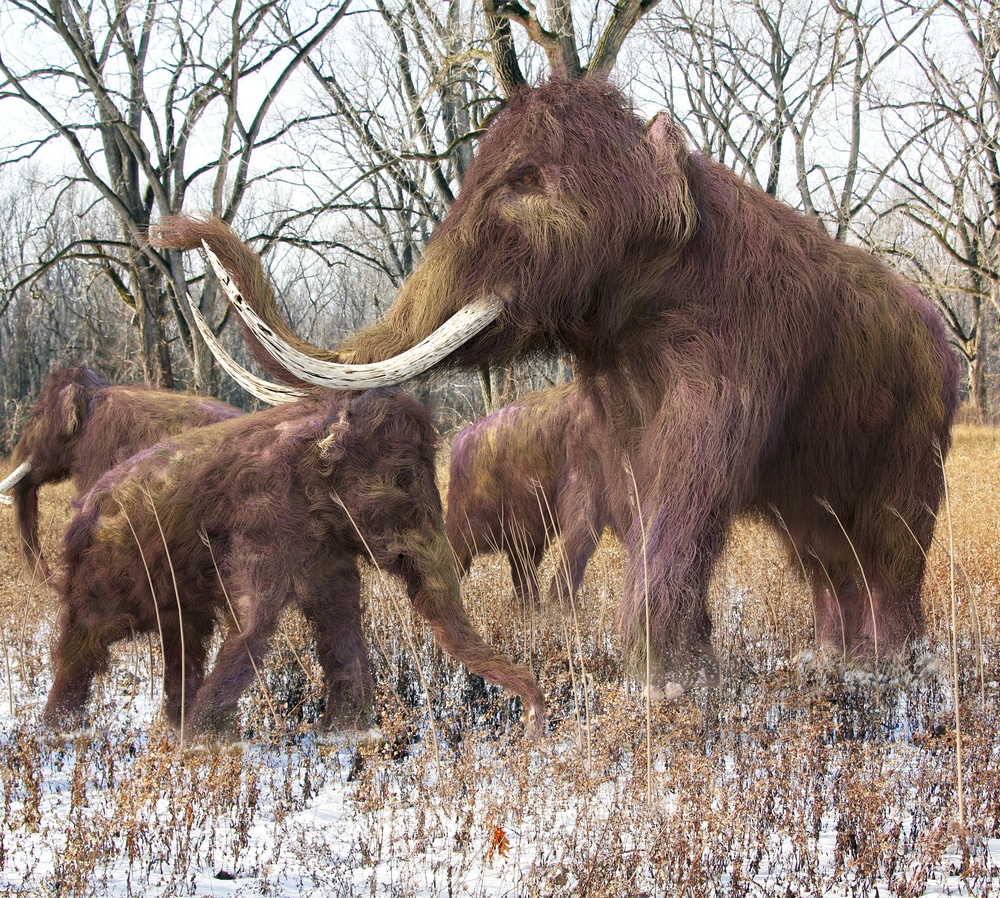 I’d submit that horses are more native to the Americas than humans. One of the biggest mistakes that I believe we make is in how we define the term  ‘native.’ The dominant paradigm of conservation is that animals that existed in the Americas when Columbus arrived in 1492 are native, and those that did not, are non-native.

This is what Paul S. Martin, a geoscientist at the University of Arizona and author of Twilight of the Mammoths: Ice Age Extinctions and the Rewilding of America refers to as the “Columbian Curtain:”

I refer to this as a short-sighted ecological window that prevents us from exploring what really constitutes a “native” species based on Columbus’ arrival to the New World… and this short-sightedness is proving troublesome in allowing conservationists to explore solid eco-restorative options.

All things relative, if 13,000 years ago (when the first Americans arrived on the continent from Eurasia) in geological and ecological time is a blink of an eye, then a 522 year period isn’t even a blip on the radar. Furthermore, using the arrival of Columbus to provide the baseline for ‘natural,’ ‘native,’ or ‘indigenous’ is downright arbitrary and dare I say stupid.

Genus: A class or group with common attributes. In biology, this refers to a taxonomic category ranking used in a biological classification that is below a family and above a species level and includes group(s) of species that are structurally similar or phylogenetically related.

Phylogeny: the evolutionary development and history of a species or higher taxonomic grouping of organisms.

Pleistocene Era: geological epoch that lasted from about 2.5 million years ago to 12,000 years ago.

De-extinction, Resurrection Biology, or Species Revivalism is the process of creating an organism, which is either a member of, or resembles an extinct species using cloning techniques.

Rewilding: Restoring an area of land to its natural uncultivated state with the reintroduction of a species of wild animal, or its close relative or proxy, that has been driven out or become extinct.

The truth is, the horses that the Spanish brought with them were actually relatives of the Equus caballus species, the extinct American Horse that died out at the end of the Pleistocene period about 12,000 years ago.

What the Spanish didn’t know if they were actually returning horses back to their phylogenetic continent of origin—the Americas— where horses evolved for tens of millions of years before migrating to Asia and Europe.

So, unbeknownst to them, the Spanish inadvertently began one of the first processes of a term coined by Paul S. Martin called “Rewilding.”

By Martin’s definition, Rewilding means to restore an area of land to its natural uncultivated state with the reintroduction of a species of the wild animal, or its close relative or proxy, that has been driven out or become extinct. This Rewilding experiment of the horses by the Spanish has been successful by most accounts. And, I submit that we can find success in rewilding more species than just horses.

Unlike de-extinction, rewilding does not require biotechnological advances— like cloning— to bring animals species back from the dead. But it does require a significant shift in pre-existing “conservational paradigms” that allow for a more practical eco-restorative approach that involves the reintroduction of currently existing, often endangered, phylogenetically similar animals to serve as proxies for eco-restoration for animals that were lost in the Pleistocene Era.

The “Jurrassic Park” romance of bringing back Woolly Mammoths, I think, for now, will have to wait because Rewilding is a lower-hanging fruit that can be accomplished today. And let’s be honest, we need something sooner rather than later.

Rewilding returns ecological equivalents of extinct native animals— ecological proxies— and allowing them to practice natural behaviors In this manner, restoring ecological integrity by taking advantage of the regulatory roles of large herbivores in reestablishing ecological balance, and increasing wilderness areas while improving the soil health. This is of paramount importance as land worldwide continues to degrade, and biodiversity continues to be threatened—both at an increasing rate. Near Time: Why Historical Context is Everything

According to Martin, in the last 50,000 years alone (or what paleontologists refer to as “near time”), the world lost half of its 200 genera of large animals weighing over 100 pounds. Not species, genera.

North America alone is missing more than forty species of large animals in this frame of time and in fact, through the use of fossil records and radiocarbon dating, scientists have discovered that the mean body mass of North America rivaled that of the African Savannah.

The Americas are a Ghost Town. They aren’t even a shadow of the robust, productive, biological systems that they once had been, and the only time we are really reminded of what it was like is when we take a trip to the La Brea Tarpits and see fossils and remnants. The question is, can a Pleistocene vision of the past give us a clear and concise vision for the future?

My answer is that nothing gives us the vision and direction for future conservation efforts like it.

I believe this is the missing piece to the eco-restoration and conservation puzzle that is conspicuously missing: the linear perspective of how we got into the current mess we are in today. How can anyone solve the ecological equation without the linear framework?

Without acknowledging ecological history, we are relegated to proposing hypothetical possibilities, and resource and time-intensive technological advances as a solution to the ecological crises while effectively ignoring hundreds of millions of years of evolutionary R&D.

It makes no sense. Rewilding does. Rewilding respects the historical context, evolutionary R&D, and the historical basis and linear equation of ecorestoration. Even if it didn’t work, at least it’s a logical direction/answer to reverse the current ecological/biodiversity crisis.

But first, what animals should be considered in this Rewilding experiment?

The Pleistocene Vision for the Future:

If we are seeking to create a truly natural assemblage of American fauna, we have to look at fossil records prior to 13,000 years ago when humans first appeared and caused ecosystem disruption, and we have to look at the Pleistocene Era.

During the Pleistocene, the most common fossils include those of the bovids, equids, and camelids. Accordingly, these would likely be among the most important groups to consider for rewilding and restoration.

A highly suitable and native bovid, the bison, and non-native cattle proxies are already here. Unfortunately, many of these migratory herd species do not cluster and exhibit natural behavior in the absence of predator species.

The equid species are currently represented by wild horses and burros, however, it may benefit us to consider other equid species as well, like zebras. Equids coevolved with plants and other North American animals for 50 million years.

Domestic camels and llamas would be fairly close surrogates for the extinct camelids. But the idea of wild or feral camels roaming across the arid Southwest seems unfathomable to most. Unfathomable or not, we may want to seriously consider it.

Some specific species, like the megaherbivores, would have exerted some of the greatest influence on the environment; largely due to their size, diets, and migrational patterns.

But the concept of rewilding isn’t exclusive to megaherbivores, it aims at filling ecological voids of other lost species, including American cheetahs, camels, lions, and mammoths, and others, and selecting appropriate proxies or ecological surrogate species for them.

Imagine Asian Elephants in California, or giant bison herds roaming in the middle of Kansas. 21st Century Conservation: The Doom and Gloom Scenario is Disempowering.

We all know that we are entering the 6th mass extinction, and while that should keep us up at night, we don’t need fear-mongering, we need something actionable. Pleistocene Rewilding, I believe, is our answer.

More than half the world’s arable land is moderately or severely degraded according to a report published by the Economics of Land Degradation Initiative. This land degradation is also estimated to cost the world as much as 10.6 trillion dollars every year, which is equivalent to 17% of the global GDP.

Effective land management is critical to alleviating poverty and ensuring food security. We are losing valuable ecosystem services such as water filtration, topsoil loss prevention, nutrient cycling, and the ability to grow food. The lowest hanging fruit that offers the greatest promise is focusing our attention to Rewilding.

Having some megafauna proxies the Americas may make some uneasy, but there’s something else that should trump that uneasiness— and that’s extinction, famine, climate changes, completely wrecked and unproductive ecosystems that lead to a loss of economic vitality and food security.

Africa’s large animals are endangered, caught between a world where wars are being waged over scarce resources and their hides and tusks offer economic incentives to poachers. If history tells us anything, and if we read the writing on the wall, we will drive them until extinction unless we embrace a bit of forward— and backward— thinking.

And since we were likely involved in the Late Pleistocene extinctions, perhaps it is even our ethical duty to redress these problems, and leave no stone unturned until we’ve got a viable, logical solution. I think Rewilding is a great start.