Adverse Effects of the Ketogenic Diet 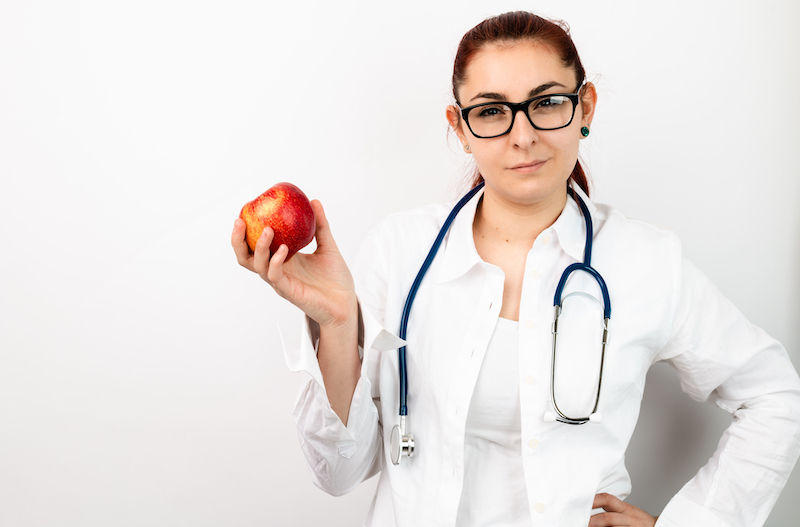 They say an apple a day keeps the doctor away, but what happens when you’re on the ketogenic diet and you’re avoiding high-carbohydrate fruits like the plague? An adverse effect is an unwanted or harmful effect that is the result of an intervention.

The classic ketogenic diet is a high-fat, moderate protein, carbohydrate restricted diet that forces the body into a state of ketosis. Fat comprises 80-90% of the calories of the diet, while the remaining calories are first allocated to the necessary protein requirements of the individual and secondly to carbohydrate.

In one study, a 3-day planned ketogenic diet with a 4:1( fat: non-fat ratio) was analyzed for micronutrient content. Nutrient-dense foods were purposely selected for this study to optimize results.

The Dietary Reference Intakes (DRI) published by the Institute of Medicine, National Academies of the US were utilized as standard goals for micronutrient intake.

However, of the 24 micronutrients evaluated, 19 were below the DRI. Of the 19 nutrients below the DRI, 11 nutrients were provided at less than 50% of the DRI: Thiamin, Folate, Pantothenic Acid, Calcium, Copper, Iron, Magnesium, Manganese, Molybdenum, Selenium and Zinc.

In addition, the omega-3 and omega-6 fatty acids were provided at 11% and 70 % of the DRI respectively [1].  Most astonishingly, a selection of less nutritionally dense foods would have resulted in even lower intakes of these nutrients.

The ketogenic diet provides sub-optimal levels of many micronutrients and of essential fatty acids required as determined by the DRI standards.

Triglycerides also increased at 3 months from the mean of 190 mg/dL (41 – 542) to 203 mg/dL (68 – 417), and then stabilized [2]. The extension of this study continued to show a significant increase in total cholesterol and cholesterol/HDL ratio at the time of diet disruption after up to 35 months of diet [3].

If extreme lipid changes occur, it may justify the interruption of dietary therapy [4]. However, it should be noted that elevated lipids are not present in all patients or in all studies, and triglycerides and LDL may not change [5].

Lipids also increase in MAD [6], although the final lipid levels in some studies were maintained within the average cardiovascular risk ranges [7]. A study of the MAD actually found a decrease in triglycerides with the treatment of the ketogenic diet in 12 months [8 ].

It is worth noting that lipids can increase during the initial phase of the diet, and then return to baseline: A study of 37 adults with MAD for at least 3 months found that while total cholesterol and LDL had increased by 3 months, there was no difference with respect to the beginning after 1 year (p = 0.2 YP = 0.5, respectively) [9].

In addition, in the case of hypercholesterolemia, it can still be manageable without interrupting dietary therapy. A patient whose LDL doubled after 3 months continued the MAD, and with carnitine supplementation (and replacement of saturated fats with polyunsaturated fats) their cholesterol and LDL returned to the normal ranges. [10].

Hormonal Effects of the Ketogenic Diet

However, in the seven that interrupted the diet, normal menstruation was resumed [12].  In the 1999 Sirben et al study, nine women (100%) developed menstrual irregularities (irregular cycles or cessation of menstruation), which were resolved with the interruption of the diet [13].

Menstrual irregularities were also frequent in the study of Mady et al. In 2003 on the ketogenic diet (45% of the women) [14].

Adverse Effects of the Ketogenic Diet on Children

In a 2011 study comparing the short-term (8 months) versus the long-term (> 24 months), Kang HC et al., they found that there were no significant differences in the tendency to relapse, correlated EEG findings, and development outcome data among two groups studied for untreatable infantile spasms [17].

The study found that of the short-term group of 8 months, 37.5% experienced nausea/vomiting, diarrhea/constipation, and 50% experienced hypertriglyceridemia, 31%  hypercholesterolemia, 31%  hepatitis, 10% osteopenia.

However, in the 2-year long-term group, 41% experienced nausea/vomiting, diarrhea/constipation, 33%  hypertriglyceridemia, 29% hypercholesterolemia, 25% hepatitis, and 20% osteopenia. Therefore, serious complications such as osteopenia, hepatitis, ureteral calculi, and growth failure occurred significantly only in the long-term test group compared to the short-term group (p > 0.05).

Gastrointestinal side effects are common, as half of the patients report some nausea, constipation, abdominal distention, or vomiting at some point in ketogenic dietary therapy.

While research on the ketogenic diet has shown numerous positive effects, potential adverse effects also deserve attention and consideration from those who have opted for the popular diet both for purposes of weight loss and metabolic improvements, as for the treatment of neurological disorders.

While all diets should be performed under the supervision of a doctor, the ketogenic diet may require more observation than other diets to ensure that these more serious adverse effects are well managed.