Does Dietary Fat Cause Weight Gain? 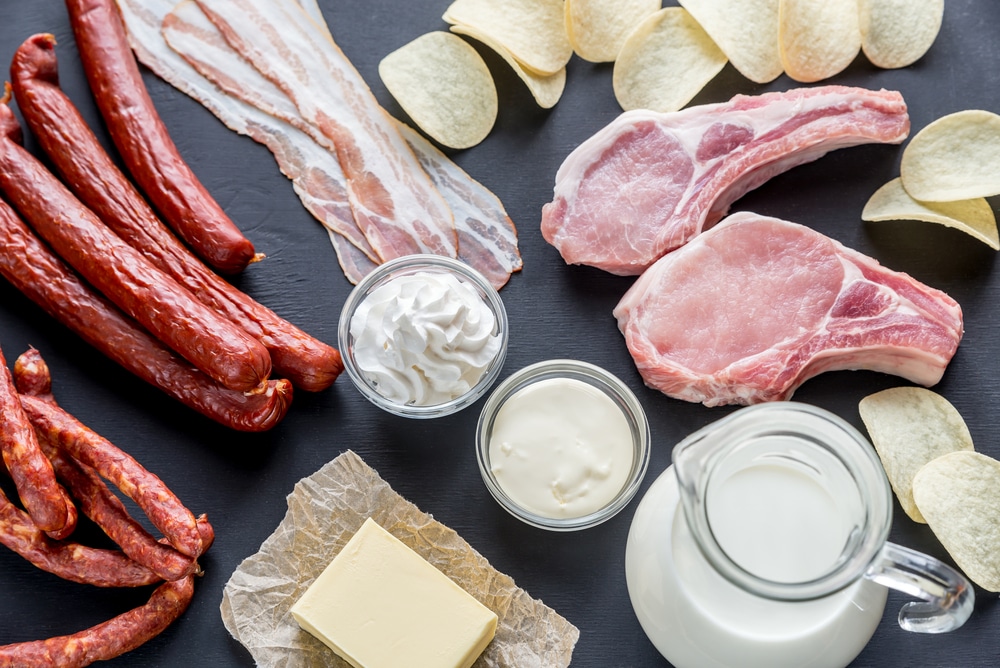 The ketogenic diet is a low-carb, high-fat way of eating that has been adopted by many looking to lose weight and improve health. However, many concerns exist as to whether or not a diet that is high in dietary fat can be healthy.

And many believe that eating fat can make you fat Afterall, it seems plausible that dietary fat has the distinct potential to cause weight gain. But the simple truth is, it’s just not that simple.

Does Dietary Fat Make You Fat?

Dietary fat is the macronutrient that can most easily increase your body fat. Dietary fat and body fat are similar, and turning dietary fat into body fat is relatively easy for your body. Of the three macronutrients: carbohydrates, protein, and fat; fat requires the least energy to digest relative to the energy it provides [1, 2].

Further, dietary is more calorie-dense and is often found to be less satiating than protein or carbs [3]. For these reasons, it would theoretically appear that eating a high-fat diet would be more likely to cause weight gain.

The first law of thermodynamics— also known as the law of conservation of energy— has controlled the concepts and conventional wisdom of weight loss. This position gives further rise to the theory that the caloric density of fat in comparison to other macronutrients would cause more weight gain.

Notably, this law has resulted in the difficulty of other organizations tasked with performing dietary recommendations in accepting the potential therapeutic roles of macronutrient manipulations that include fat in weight loss efforts [4]. However, despite dietary fat having more calories than protein or carbohydrates per gram, it’s the evidence that matters.

Evidence That Fat Does Not Make You Fat

When following a ketogenic diet, carbohydrates are typically reduced to under 50 grams per day. This macronutrient manipulation has been shown to lead to greater satiety, reduced caloric intake, and weight loss. [5, 6, 7, 8, 9] .

Further, while calories unequivocally matter in terms of weight loss and weight gain, the majority of ad-libitum studies demonstrate that subjects who followed a low-carbohydrate, high-fat diet lost more weight during the first 3–6 months in comparison to those following a more macronutrient-balanced diet [10 , 11 , 12].

The weight-loss effect of the ketogenic diet appears to be due to several factors. While the underlying mechanisms for this are not well established, the simplest possible explanation for improved weight loss observed by those following a ketogenic diet is a possible appetite-suppressant action of ketosis. These occur by way of:

• The direct action of ketone bodies on changes in levels of hormones such as ghrelin and leptin, which heavily influence appetite and satiety signaling and caloric intake [ 14 ].

• Reduction in appetite due to higher satiety effect of proteins. [ 15, 16 ] effects on appetite control hormones [x] and to a possible direct appetite-suppressant action of the ketone bodies [ 17 ].

• Reduction in the resting respiratory quotient which is associated with greater metabolic efficiency. [ 19 , 20 ]

• Increased metabolic costs of gluconeogenesis and the thermic effect of proteins [21,  22].

Is a High-fat Ketogenic Diet Therefore Superior to a Low-fat Diet?

The most painful truth of nutrition is that the evidence weighing both dietary interventions for the population is almost entirely inconclusive.

In fact, in 2018 a year-long randomized clinical trial (RCT) called DIETFITS explored this very question. It found that a low-carb diet and a low-fat diet both led to similar weight changes on average.

However, the variations within the group suggested that the weight-loss potential varied significantly between the members of the individual groups.

According to the findings of the study, participants from both the low-carb and low-fat groups lost anywhere from 32kg (70lbs) to gaining 11kg (24lbs) during the study. In other words, individual differences may matter more in terms of weight loss than the diet being low-fat or low-carbohydrate.

And, while the low-fat diet and low-carb diet produced similar metabolic outcomes overall, neither were universally healthy for the participants [ 25 ]. 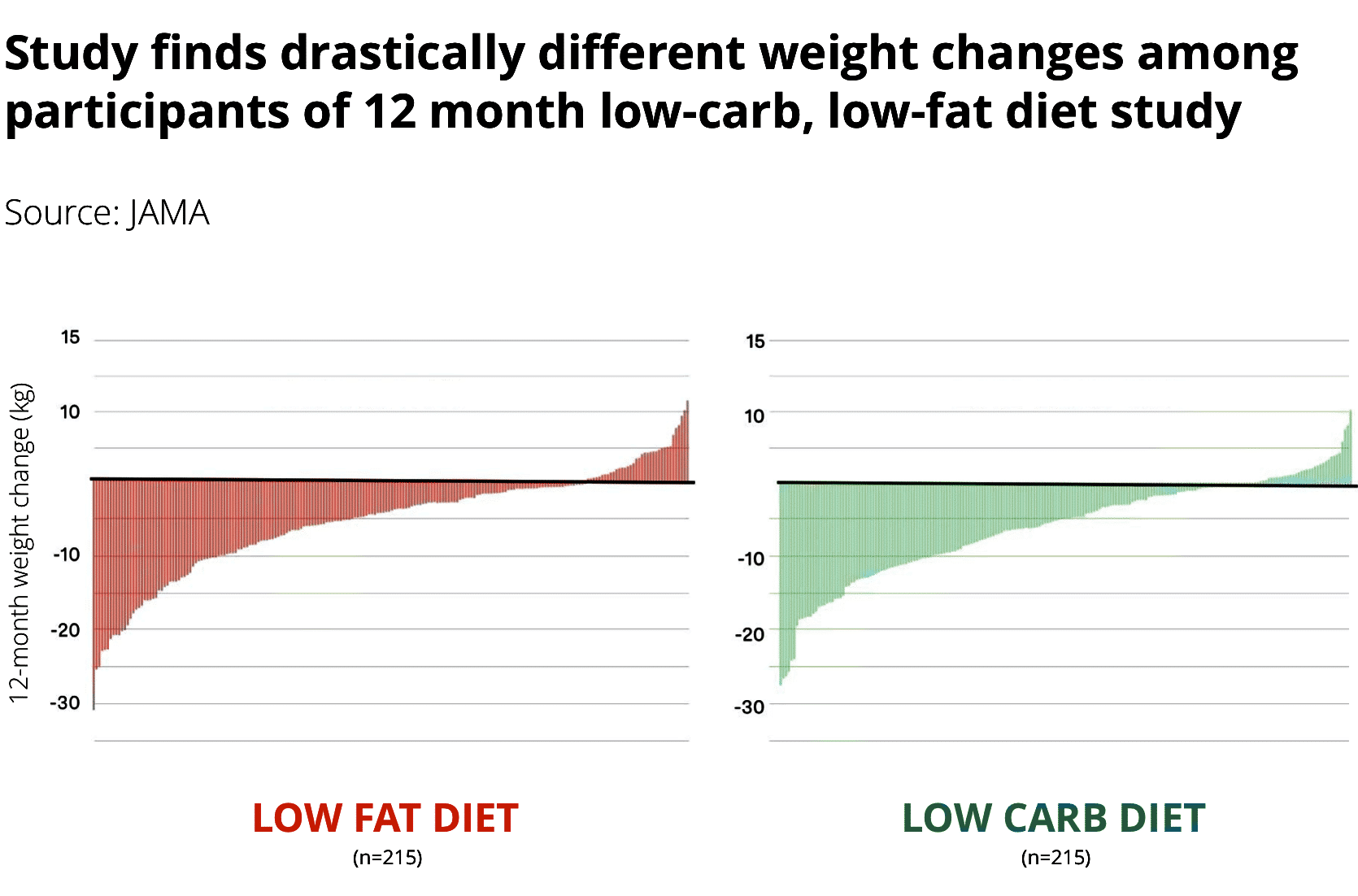 Ultimately, What Does This All Mean?

In 2015, researchers examined the blood sugar levels of 800 participants over the course of a week, finding that even if people ate the exact same meal, the metabolic response drastically differed from person to person.

In other words, what they found was that what was completely healthy for one individual was completely unhealthy for another [ 26 ]. The importance of such landmark health studies should make it clear that the notion of personalized nutrition cannot be understated, and that blanket health and nutrition advice is inaccurate at best.

Thus, you should choose your diet based on your own goals, your own responses to foods, and your own ability to make it sustainable for you. And, it means the answer to whether dietary fat makes you fat or not, is going to largely depend on how you respond as an individual to a high-fat, or ketogenic diet.

For this reason, we encourage self-experimentation, and the supervision of a health care practitioner to help you find the diet that is right for you and will aid in your weight loss goals.