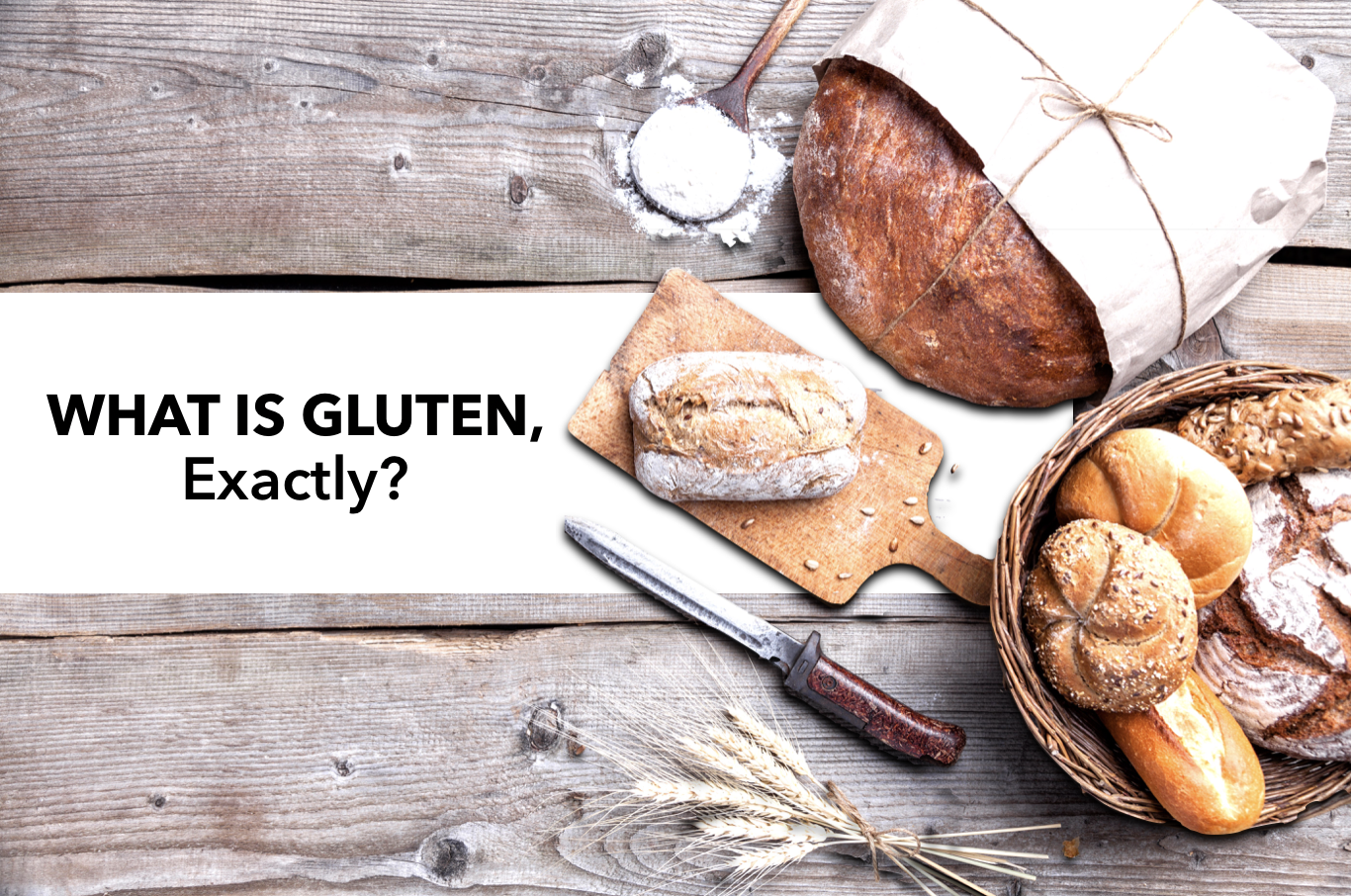 In short, gluten is not a single protein. Gluten is a long, molecular structure or “mesh” formed by two seed storage proteins, gliadin, and glutenin that are connected by disulfide bridges, created by mechanical stress in an aqueous environment.  However, to explain what gluten is in a meaningful way, you will first need to have a cursory understanding of the anatomy of grains and their seed storage proteins. This information helps you understand both the structure of gluten and the practical function of gluten in the food industry.

Four distinct parts comprise a whole grain: the hull, bran, endosperm, and germ. Each of these parts contributes to the overall nutritive value of whole grains:

• Hull: The hull is the outer layer of a whole grain that protects the kernel from fungus and various granivorous pests.

• Bran: The bran is the outer skin of the grain. It contains fiber, antioxidants, B vitamins, and trace minerals.

• Endosperm: The endosperm is the energy supply to the germ or the germinating part of the seed. As much as 85% of the grain’s protein comes from the endosperm.

• Germ: The germ is the embryo of the seed. It forms a sprout if pollinated, and contains B vitamins, and phytonutrients. 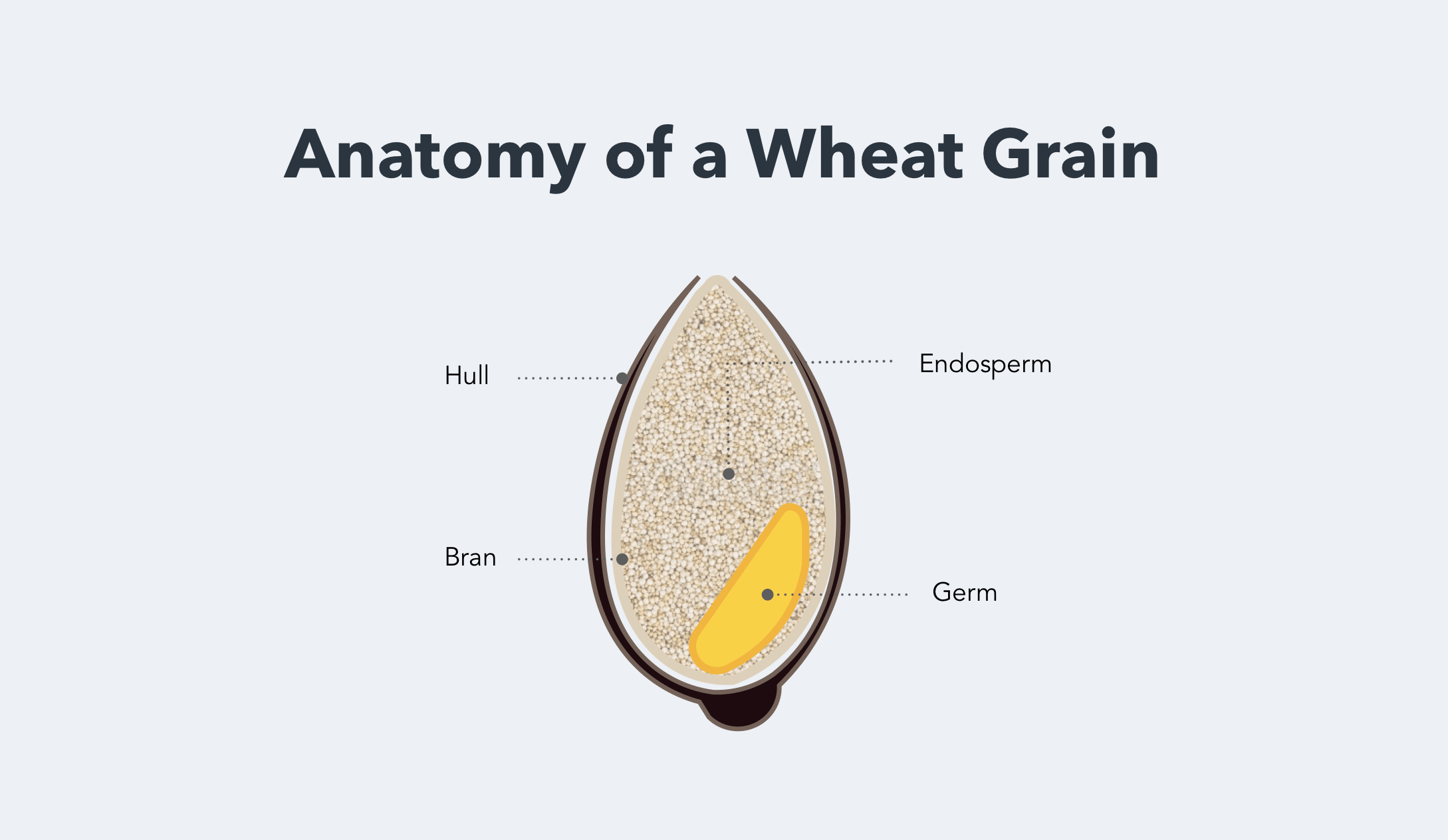 While all grains contain these four distinct parts, several different types of proteins make up the total protein content of various grains or cereals.

Plant proteins are divided into four different groups according to solubility: Albumins, Globulins, Prolamins, and Glutelins:

Albumin and Globulin: Water-soluble albumin and saline-soluble globulin are “metabolic proteins” that are considered to have a perceived secondary role in flour quality, but have nutritionally better amino acid profiles compared to the rest of the proteins in grains.

Albumins and Globulins are rich in essential amino acids including lysine, tryptophan, arginine, and methionine. Albumins and globulins serve as nutrient reserves for the germinating embryo and protect the embryo from insects and pathogens.

Prolamin and Glutelin: Alcohol-soluble Prolamin and Insoluble Glutelin are biologically considered the “storage proteins” or “defense proteins” of the grain. They are carbohydrate-binding proteins, which are commonly referred to as either lectins or agglutinins.

Lectins and agglutinins are widely considered pathogenesis-related proteins and are the evolutionary defense mechanisms of the grain.  Storage proteins have large proportions of glutamic acid and proline and have low amounts of lysine, arginine, threonine, and tryptophan.

The majority of wheat’s protein content comes from the endosperm.  Albumin and globulin represent roughly 15-20% of the total protein content of the endosperm, and gliadin and glutenin make up the remaining 80-85%.   In wheat, gliadin (a prolamin) represents 30-40% of the total protein, and the glutenin (a glutelin) represents 40-50%.  The gliadin and glutenin protein amounts are in similar amounts. 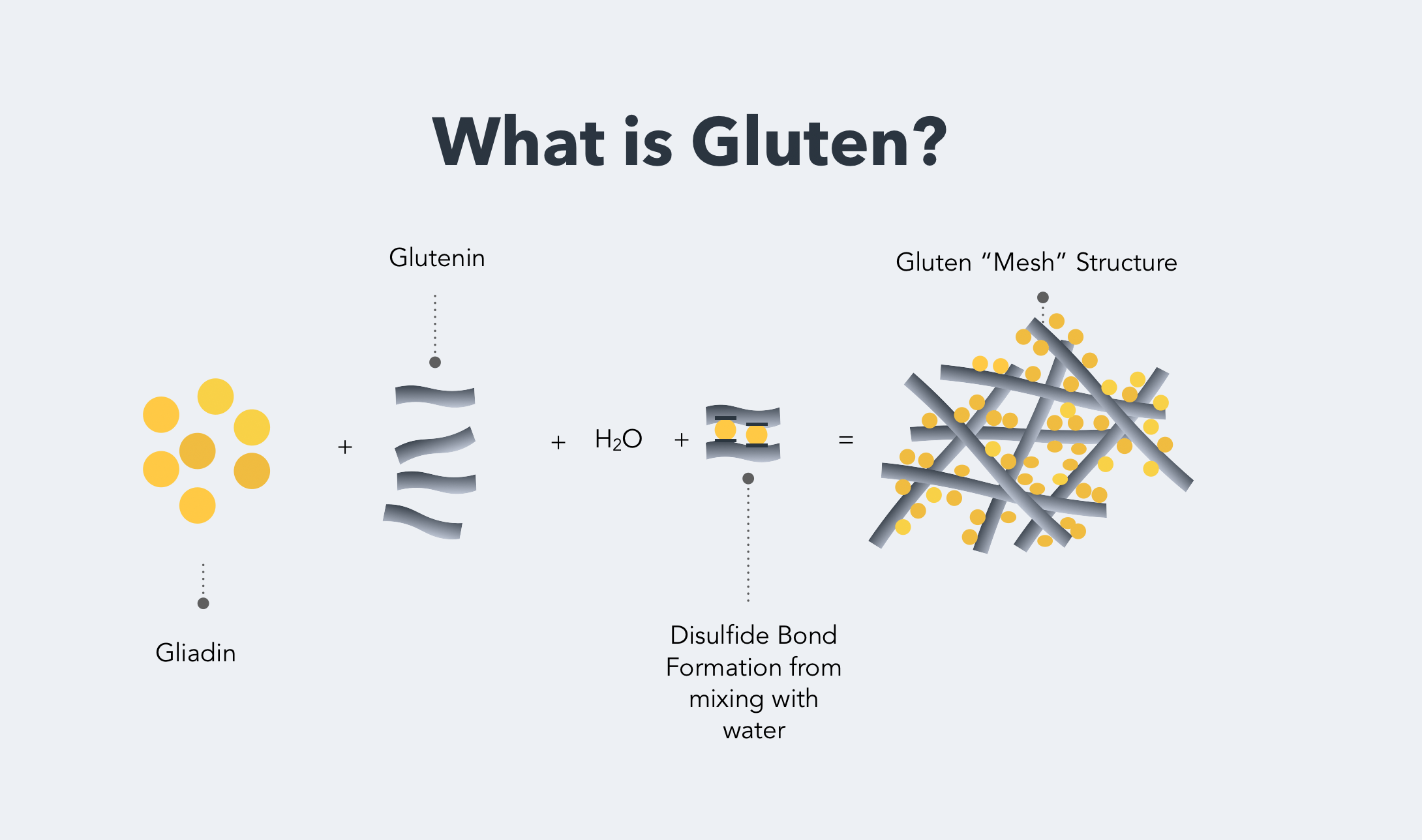 Putting it all together: Making Gluten

As previously stated, gluten is not a single protein. It is a long, molecular structure or “mesh” formed by two seed storage proteins, gliadin, and glutenin that are connected by disulfide bridges, created by way of mechanical stress in an aqueous environment.  In other words, when gliadin and glutenin combine with water, a three-dimensional gluten “mesh” structure is formed.  In the gluten mesh, gliadin gives the dough plasticity and elasticity, while glutenin provides strength and structure.

Due to the formation of these intermolecular bonds, the “mesh” traps starch granules and carbon dioxide that is produced during the leavening process, causing the dough to ‘rise.  It is the “gluten-mesh-trap” that givens the final product a doughy, airy, and highly desired texture. These are the properties that make gluten products so appealing in the food industry.  In fact, the characteristics that gluten imparts on baked goods are so desirable; bakers will even add additional gluten protein to their recipes.  Perhaps you have seen a recipe that called for a tablespoon or two of an ingredient called vital wheat gluten.

If called for as an additive in baking, its purpose is to add elasticity to products made from flours that would otherwise be low in gluten, lacking those chewy, desirable traits.  To isolate the rubbery Gluten “mesh”, wheat flour is washed with water to remove excess starch, and the water-soluble non-gluten albumin and globulin proteins. In gluten-free baking, xanthan gum is often used in its place.

Ultimately, the gluten mass is comprised of 80-85% protein from the insoluble gliadin and glutenin, 5% lipid, while the remainder is starch and non-starchy carbohydrate.

Are Grains and Pseudograins Healthy?

Why a Grain Free Diet May Be Best for Autoimmune Disease