How a Menstrual Cup Can Change Your Life 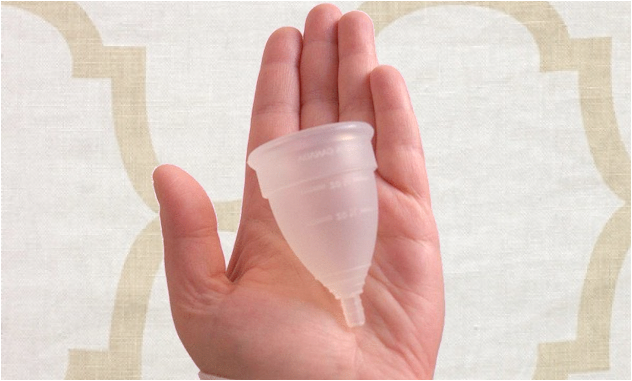 I had a long list of health problems and maladies that led me to discover the Paleo lifestyle, not the least of which included extremely painful periods.  For years, my monthly cycle literally brought my life to a halt, as I would be forced to call off work due to the horrific cramps that I experienced the first few days of my period.

I also had other unpleasant symptoms surrounding my periods, including drastic mood swings and depression, acne, bloating, and migraines. I brought these concerns to the attention of my physician upon several different occasions, and in typical mainstream medicine fashion, numerous tests were done and findings were inconclusive.

Instead of these symptoms being recognized as warning signs of a bigger underlying problem, I was reassured that this was just an unfortunate part of being a woman and I was offered hormonal contraceptives to “control” my cycle (as though the female body shouldn’t be trusted to produce the right amounts and ratios of hormones on its own), as well as separate medications to deal with each of symptoms.

Years earlier, I had learned that synthetic hormones did not agree with me at all and I preferred not to take medications with dangerous side effects, so I refused all of the prescriptions and settled for taking large doses of ibuprofen to deal with the pain, likely further potentiating my gut health issues.

When I discovered the Paleo lifestyle, it took me a while to realize that the symptoms surrounding my period were slowly, but surely, improving. I suspect that gluten sensitivity was largely responsible for many of the symptoms that went along with my painful periods and research does support such a correlation. In addition, my body was in a state of wildly uncontrolled inflammation and I had several hormonal imbalances.

Such issues take a lot of time and concentrated effort to correct, but things did seem to be gradually turning around. The cramps themselves were improved, but after a year and a half of following a strict nutrient-dense Paleo diet, they were still interfering with my life. In my quest to live more Paleo, I had switched my personal hygiene products to greener versions, including feminine hygiene products. I had always preferred tampons to pads because I found them less messy and a better fit for my athletic lifestyle.

Learning of the dioxins, petrochemicals, and synthetic fibers that are in conventional products, I switched to 100% cotton, non-bleached tampons. I can’t say that there was a noteworthy reduction in my cramps at that point, but at $7.00/box, they did put a significant strain on my wallet. And then I discovered the menstrual cup and everything changed (well, at least my period did). A menstrual cup is a flexible, bell-shaped device that is inserted into the vagina to collect the menstrual fluid, rather than absorbing it as pads and tampons do. Most menstrual cups are made of medical-grade silicone, which is hypoallergenic, safe, and easily cleaned. Some menstrual cups are made of latex, but I would recommend using caution with those as it is possible to develop a latex allergy with frequent, repeated exposures to the mucous membranes. There is one brand of menstrual cups that is disposable (Instead Softcups) and there are many brands that are reusable (Divacup, Mooncup, Lunette, Sckoon, and The Keeper—just to name a few).

Most brands of menstrual cups offer a few different sizes and choosing a size is dependent upon the amount of your flow, whether or not you have ever been pregnant, your age, location of your cervix, and how physically active you are.  When changing a reusable menstrual cup, you remove the cup, empty the menstrual fluid into the toilet, rinse the cup out with water, and then reinsert it. Most manufacturers recommend boiling the cup in the water at the end of your cycle to cleanse it thoroughly, but I boil mine once a day during my cycle just to make sure that it is extra clean and fresh.

There are numerous benefits to using a menstrual cup. The most significant for me is that it has eliminated about 95% of my cramps and I find that my period is a few days shorter. It’s also incredibly comfortable and I literally can’t feel it at all when inserted correctly. This seems to be the anecdotal case for a lot of other women as well. The cup doesn’t sit against or hit the cervix and it doesn’t compromise the pH balance of the vagina.

Because it doesn’t absorb the fluids, a menstrual cup also greatly reduces the risk of toxic shock syndrome. Depending on the size of the cup and the amount of your flow, the cup does not have to be changed as often as tampons or pads for many women. On most days, I only have to empty my cup twice a day. On the heaviest day of my period, I do have to empty it more frequently, but usually no more than four times per day.

The reusable cup has some financial perks as well. The cost of most cups is in the $30-40 dollar range and they can last from 1 – 10 years, depending on the brand and the manufacturer’s recommendations. For myself, that will result in a cost savings of about $130 per year in feminine hygiene products alone! Because the cup is reusable, environmental waste from applicators, wrappers, tampons, and pads is eliminated.

A few of the things that cause some women anxiety about using a menstrual cup is insertion and removal. Inserting it is not all that different from using a non-applicator tampon. That did nothing to allay my fears because I’ve never liked non-applicator tampons. But suffice it to say that it truly isn’t hard at all.

There are many different ways to fold the cup in order to easily insert it. I watched a video on the different insertion folds and I found one that works for me. It does take a bit of practice to learn how to insert the cup properly to avoid leaking, but within three trial insertions, I had mastered it. Removing the cup is harder than removing a tampon with a string, but not a lot harder with practice.

The cup is designed to form a light suction seal with the walls of your vagina and you have to break the seal in order to remove it. You can usually accomplish this by pushing against the base or wall of the cup and then pulling down to remove the cup. Many cups come with a small stem attached.

Although the manufacturers advise you against pulling on the stem to remove the cup, at times, I’ll admit that I’ve found it useful to use the stem to pull it gently down enough that the seal can be broken.

The most important thing about removing the cup is to relax!  It’s not possible to lose the cup in your vagina—I promise! If you are having trouble removing the cup, simply relax and try again later.

Another common concern with using a menstrual cup is the ick factor. You do have to be comfortable with your body when using a cup. You will probably get some blood on your hands and you may accidentally spill the contents of the cup on the floor if you don’t remove it properly or if you’re clumsy.

Being a nurse, I’m really comfortable with bodily fluids, especially my own, but this could be a deterrent for some women. Emptying a menstrual cup in a public restroom can be a challenge, but many women simply take some wet paper towels into the stall to wipe out the cup. Keep in mind that you shouldn’t need to change it as often as a tampon or pad. If you have an IUD, you will want to use a lot of caution and let your health care provider know that you plan on using a cup.

All in all, I would say that my discovery of the menstrual cup has been life-changing. I no longer dread my monthly cycle, and in fact, after day one, I barely notice that it’s there (yes, honestly!). If you’re considering the use of a menstrual cup, I highly recommend giving it a try. It’s a safe, non-toxic, environmental-friendly way to deal with periods.

If you have any experiences with a menstrual cup, positive or negative, I’d love to hear them!