Monosodium Glutamate: Is MSG Bad for Your Health?

Glutamate flavoring is the term used for flavor-enhancing compounds like glutamic acid and its various salts or glutamates. The taste they impart is called “umami,” or having a savory characteristic typical to that of broths and meat-based dishes. Glutamates are used in many food products including fermented foods, soy sauce, cheese, and even yeast extract. [1]   However the most popular and controversial glutamate is synthetic monosodium glutamate (MSG).

Glutamic acid is an amino acid that is produced by our bodies and is the most common excitatory neurotransmitter in the central nervous system.  It should be noted that the human body naturally produces glutamic acid and there is no chemical difference between the glutamate found in MSG and the one in natural foods. [2]  However, in order to establish whether or not MSG is bad for your health, more information is necessary.

In 1991, it was estimated that the average daily intake of MSG in the US and UK is 580 mg/day while the number is more than double in Eastern countries such as Japan and Korea which goes up to 1.7 g/day. [3, 4]   However, researchers suggest that the amount of MSG consumed could be much higher, as high as 10 g/d, due to today’s fast food lifestyle. [4, 5]

Why is Monosodium Glutamate (MSG) used?

MSG is mainly used as a flavor enhancer, specifically when it comes to the food’s savory or meaty profiles. It was once thought to be only prevalent in Asian cooking, but it can now be found in a lot of processed foods in Western countries.

What arguments could be made for the use of MSG in food?

Aside from bringing out the real flavor of savory dishes, MSG helps reduce other sodium-heavy seasonings in food.  It also has 1⁄3 the amount of sodium table salt which enables cooks to decrease the amount of total sodium content in the food they prepare.  You could perhaps even say that adding MSG is beneficial to those who are on a prescribed low-sodium diet. [6,7]

Is MSG bad for your health?

The concerns regarding Monosodium Glutamate range from being associated with obesity to being a contributing factor to headaches and depression.

In China, MSG consumption has been strongly attributed to weight gain, with the average intake between 0.33 – 2.2 grams per day. [8, 9]  However, the result is not replicated in studies from different countries such as Vietnam whose subjects also consumed the same amount of MSG per day. [10]   There are also studies that point to MSG’s inducing effects on depression and headaches.  However, those studies were either mostly done on non-human subjects (such as rats or mice) and used excessive amounts which, when converted, are nowhere near the standard allowable doses in our food today. [11, 12]

Lastly, there’s also the condition called “Chinese Restaurant Syndrome” or MSG Symptom complex. This condition is best described as symptoms that some people experience after eating Chinese food, which has been linked to the use of MSG. [13]  Symptoms included muscle tightness, numbness, flushing, nausea, heart palpitations, and headaches.  However, the existence of MSG Symptom complex does not say MSG is inherently harmful.  It does, however, suggest that MSG Sensitivity is a real issue.  But, the threshold dosage is at least 3 grams MSG per meal, which is roughly six times the average daily intake of someone in the United States. [14]

Putting it all together

While free-form glutamate from MSG may cause this issue, other foods that are naturally high in glutamate may also cause similar symptoms.  Common foods include matured, cured, and preserved meats, cheeses, mushrooms, ripe tomatoes, soy sauce, and bone broth.  If you experience muscle tightness, flushing, and headaches or general malaise following the consumption of these aforementioned foods, MSG may be bad for your health.

The USDA has given Monosodium Glutamate a generally recognized as safe (GRAS) designation, and the European Union classifies it as a permitted food additive as well.  Popular alternatives include soy sauce, turmeric, cumin, and various salts such as sea salt and Kosher salt.  However, these alternatives don’t have the same umami effect of MSG, but they can enhance or improve the overall flavor to some degree.

The Paleo Foundation does not allow MSG as a food additive in Certified Paleo products for the following reasons: 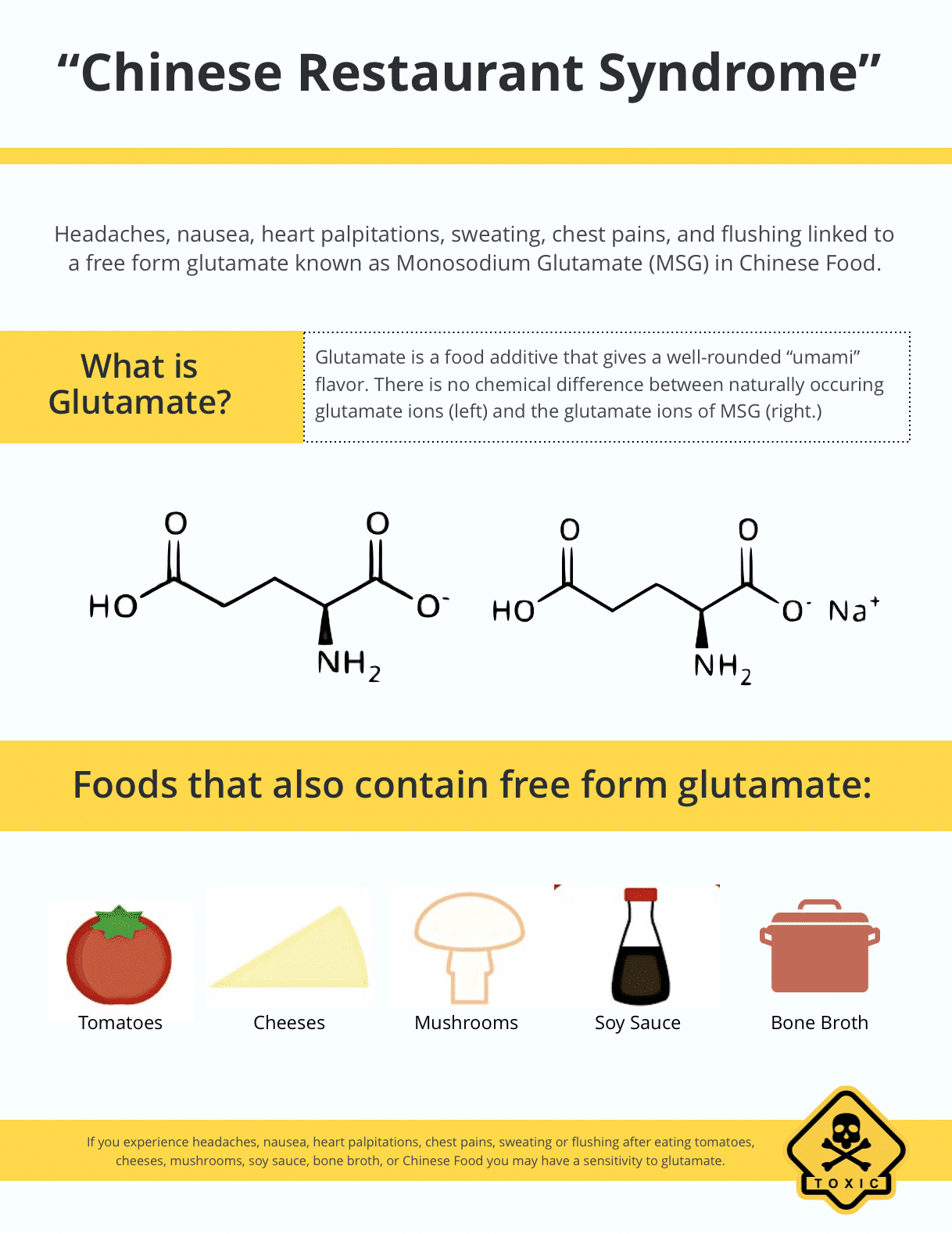