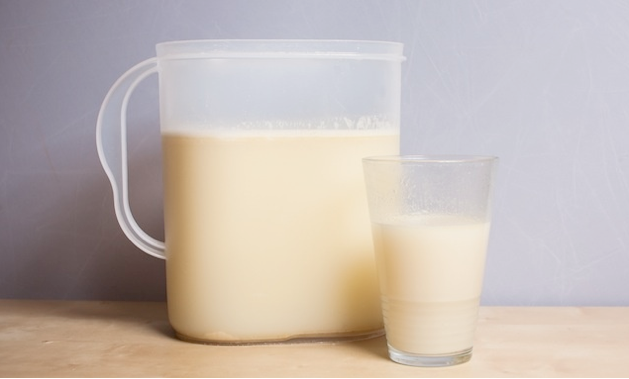 Recently while I was streaming through my Facebook feed while sitting in class, I ran across Soylent’s recently announced nutrition information.  I then decided to try to tackle Soylent and give it a breakdown of what I think it could be best used for.

For those of you who don’t know what Soylent is, it is a meal (or rather, food) replacement created by Rob Rhinehart.  The goal of this product is to provide food to those who don’t feel like—well, eating food. The idea of having people consume “daily recommendations” of nutrients without going through the hassle of cooking, cleaning, choosing, or – god forbid – chewing made waves across social media and news outlets.  Rhinehart launched a crowdsourcing campaign and raised over $2 million (20 times more than their goal of $100,000). Soylent is relatively cheap (just over $3 per meal, while Rhinehart wants to get it to less than $5 per day), and easy to make at home.  People have even come up with their own recipes for the drink.

So, onward with the nutrition information (it can be found here under the blog titled “Soylent 1.0 Final Nutrition” or in a PDF form given by the producers here). For the sake of this blog post, I will a very overview of both the micronutrients and macronutrients in different sections.

The first thing on the list I notice, is the fat content. The fat in Soylent is a mere 5 grams (or 24 grams with the added oil packet), with 1 gram of saturated fat (3 with oil packet). For those of us who subscribe to diets high in dietary lipids, I think this strikes us hardest. The saturated fat content in the Soylent with the combined oil packet is comparable to a 3 ounce steak. A single avocado has more saturated and unsaturated fat in it than Soylent (and I’ve been known to eat more than one of those in a day), plus you can also make smoothies out of them. In addition, the fat in Soylent seems to come mainly from canola oil (56 grams vs the 6.4 grams from fish oil). Strike one for Soylent.

Next is the carbohydrate content. Soylent contains 84 grams of carbohydrates per serving (3.5 time more than that of fats with the added packet, and over twice that of protein).  The problem with this is that the carbohydrates seem to be sourced from Maltodextrin, a food additive made from starch (usually corn in America and wheat in Europe) that is rapidly absorbed by the body as glucose, along with oat flour.  I’m not so sure about you, but none of that sounds very Paleo to me.  It might also lead to a glucose crash (maybe that’s what was happening with this guy’s story). Strike two.

Finally, protein. From the ingriedients list, it seems as though rice protein is the main protein involved in Soylent. Rice protein (and oat flour) lacks the essential amino acid, lysine, which is involved in converting fats into energy, lowering cholesterol, increase calcium absorption, and building collagen, a major connective tissue found throughout the body. Oat flour is just as bad with lysine, so I wouldn’t expect consumers of Soylent to get much of this amino acid in their diet. I think people would be much better off simply eating meat. Strike three.

Though the micronutrient content doesn’t seem so awful, as does the macronutrient content, I still have some worries for Soylent.  I’m skeptical about the bio-availability of many of the nutrients, especially because much of the drink is made from rice protein and oat flour.  It raises the question “are we actually digesting all of the nutrients that are supposed to be in Soylent?” That, I don’t know. It seems like the drink would have a large amount of phytates, lectins, and other antinutrients that could harm your chances of absorbing vitamins and minerals.  Plus, with the fat content, I wouldn’t be surprised if much of the fat-soluble vitamins (A,D,E, and K) go to waste since the vitamins need to dissolve in fat in order to pass through the intestine.

Ok, so it may not be so good for you, but are there any positives?

The idea that a days worth of Soylent could be sold for $5 is amazing! In a time where Americans are starting to learn to thrive with their health, millions around the world are still struggling to survive.  Many are unable to get even the minimum amount of nutrients to survive, and however bad Soylent may be for us to thrive on, it could put a huge dent in the numbers of those struggling to survive.  Plus, you also have to remember that the $5 mark still gives Rhinehart some profit.  Imagine what it could do if it were funded from donations or non-profit sectors. I think, if given the right circumstances, that Soylent could challenge the great strides that were created by Plumpy’nut (which costs about $60 for two months worth). It could be a challenge to hunger everywhere.