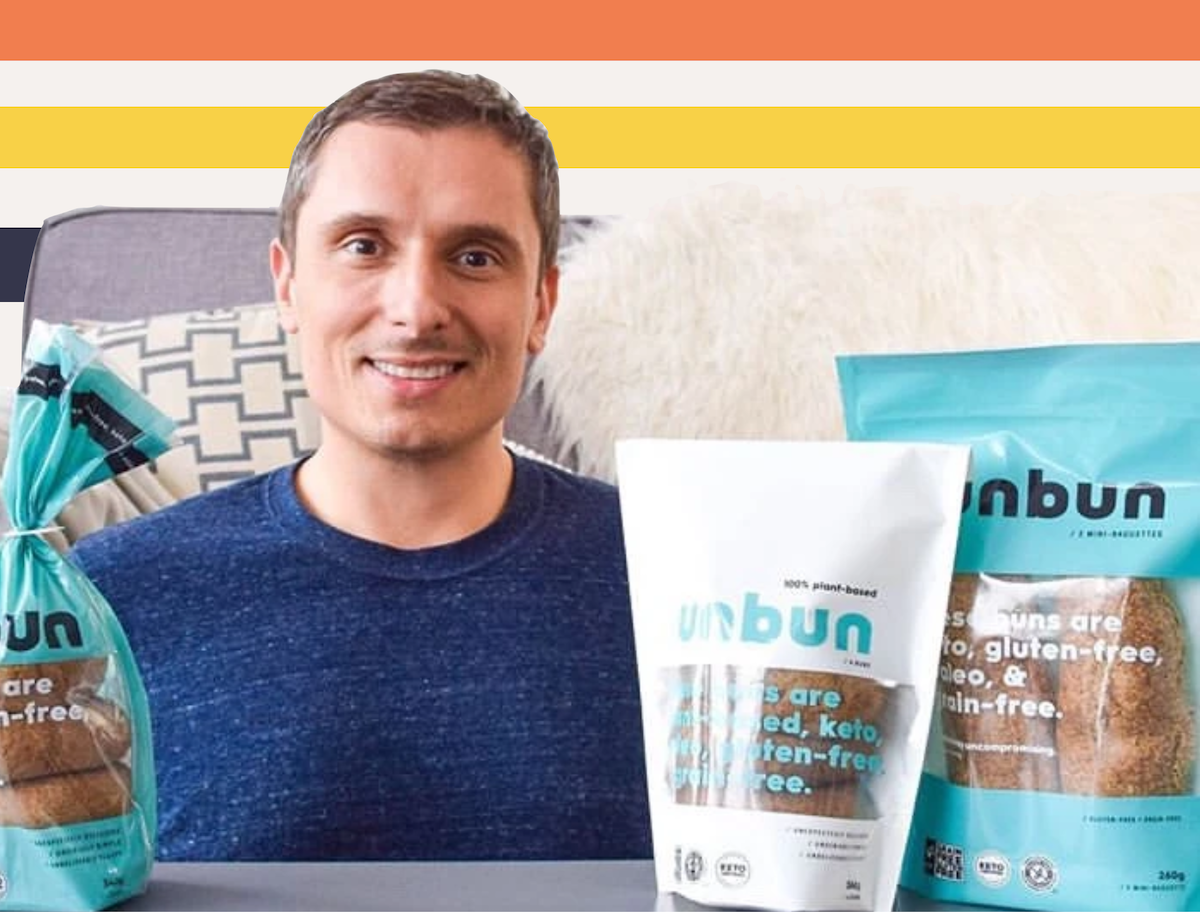 The vast majority of health food brands market their unique line of product offerings directly to the consumer. The advent of major online retailers such as Amazon and Thrive Market, and the relative ease of setting up your own e-commerce platform, has allowed thousands of individuals and small companies to get a foothold in the industry through direct marketing practices. As any health food entrepreneur can attest, however, receiving, processing, fulfilling, and shipping thousands of individual orders can lead to major losses of efficiency…and your sanity.  Unbun Foods is one health food brand specializing in Paleo, Keto, and Grain-free Certified buns, baguettes, wraps, pizza crust, and tortillas that has taken a different marketing approach.

Instead of focusing exclusively on the individual consumer, Unbun Foods is primarily concentrated on marketing its line of low-carb and grain-free buns to thousands of restaurants, food services, and retail grocery outlets across the country. With this unique marketing approach, this Toronto-based company which was founded in 2018, has quickly grown to sell its products to well over 1,800 locations, including Loblaws, Metro, Whole Foods, MR. SUB, The Burger’s Priest, BurgerIM, Firkin Pubs, Erewhon Market, and more.

One of the biggest challenges for the millions of people around the world who adopt the Paleo or Keto Diets is being able to find local restaurants that allow them to enjoy the “comfort” foods from their past. Hundreds of small, health food startups have begun to fill the market demand for healthier, low carb grain substitutes. From cheddar crisps as a low carb cracker to cauliflower-based pizza crust, finding low-carb alternatives for cooking at home is becoming increasingly easier.

Unfortunately, when going out to eat, options are much more limited for people on diets. The average American eats out almost six times per week, with the average household spending almost $3,500 each year at restaurants. People on low carb diets, however, tend to eat out less frequently, mostly due to limited menu options.

Gus Klemos, the founder of Unbun Foods, says that a desire to enjoy the foods he craved without having to feel remorseful about the enormous amount of carb intake was one of the primary motivations for founding the company. “I wanted to be able to eat the foods I enjoy – especially sandwiches and burgers – without the gluten, and empty carbs associated with buns made from processed white flour,” Gus says. When he began searching for commercially available gluten-free options, he was disappointed to find that most of the gluten-free bread alternatives on the market were filled with sugar, preservatives, and chemical binders/gums.

“I didn’t want to use starches or weird gums that I consider the equivalent of performance-enhancing drugs of baking. We’re working with Mother Nature’s ingredients to create a good-tasting bakery product that also happens to be grain-free and keto-friendly,” he says.

Before founding the company, Gus used to make his own buns from almond flour, flax, and coconut flour (with psyllium and whole egg as binders) and smuggle those buns into restaurants in order to enjoy a sandwich or a wrap. “I really wanted to make a healthy product that hits every one of the dietary restrictions I had, which is grain-free, low carb, and plant-based,” Gus says.

After experimenting with different recipes, Gus founded Unbun Foods and was able to successfully launch the Unbun Keto bun, which only five grams of net carbs, while packing in 10 grams of protein, 12 grams of fiber, and just 240 calories. Today, Unbun Foods markets a wide variety of low carb and grain-free “bread substitutes,” including:

All of their products are made from a mixture of blanched almond meal, coconut flour, and coconut milk, eggs, pumpkin seeds, flax meal, chia seed meal, psyllium husk, and olive oil. Unlike other gluten-free bread substitute products, however, Unbun foods is committed to using only natural ingredients. Many companies market their gluten-free products as a healthier alternative to grain-based breads when in reality they are filled with other grains, starches, and chemical binders that are unhealthy. Other restaurants and diners have unfortunately experimented with other low-carb bun substitutes such as the lettuce bun. “Let’s be honest,” Gus says, “No one should ever have to call lettuce a bun. If you’ve ever had a burger or a sandwich with a couple of pieces of lettuce around it, underwhelming and sloppy would be the best things you could say about it.”

The perfect structure of the Unbun, however, is due to the clean ingredients and the use of all-natural binders, including psyllium husk, olive oil, and whole eggs. The company´s mission is simple: “To give people that follow low-carb, paleo, gluten-free, grain-free and plant-based diets the option to still enjoy their favorite restaurants, chains, fast food and meals at home without compromising taste or quality of dining experience.”

As of late 2019, Unbun Foods increased its distribution from 115 locations to well over 2,000 locations across the United States and Canada in just nine months. Besides selling their products at major North American food retailers such as Loblaws, Whole Foods, and Metro, they also sell their grain-free and low carb products to thousands of restaurant and foodservice chains, including Pizza, MR.SUB, The Burger’s Priest, BurgerIM, Firkin Pubs, among others.

One of the secrets to their quick growth is to get as many people to try their product as possible. In a recent interview, Gus says that “I just try to grow as quickly as possible and just have as many people as possible try out products.” Whereas many gluten-free bread products hardly live up to the taste and texture expectations of consumers, Unbun Foods proudly and firmly believes that people who try their products will come away more than satisfied with the overall taste, texture, and quality.

To achieve maximum consumer exposure in the shortest amount of time, Unbun Foods focused on getting their products into restaurants and foodservice locations. Hundreds of restaurants, including everyone from fast-food chains to mom and pop country kitchens, are incorporating Keto or low carb menus as a strategy to attract consumers interested in healthier lifestyles. The enduring popularity of the Keto diet proves that it is not simply a one-off fad diet, but a fundamental part of holistic, healthier lifestyles.

While the Portobello mushroom might be an innovative replacement for a hamburger bun (and is certainly better than a piece of Romaine lettuce), many restaurants have been looking for a quality, grain-free bun alternative. In terms of quality, many of the gluten-free products on the market simply are not restaurant quality, and the poor texture causes them to crumble before restaurant patrons are able to take their first bite.

Unbun Foods, then, found a willing and eager market in restaurants and foodservice locations looking for high quality, low carb, and grain-free bread alternatives for their clients.

Obviously, growing a company that was founded in a one-room condo into an industry leader that is sold in thousands of locations across the continent doesn’t come without some growing pains. In order to potentiate and firmly establish the seemingly endless opportunities for growth, Unbun Foods recently raised $1.9 Million in aggregate gross proceeds through a private placement offering.

A private placement offering is a sale of stock shares or bonds to pre-selected investors or institutions. Instead of trying to raise a maximum amount of money raised on the open market through an initial public offering (IPO), Unbun specifically chose this investment vehicle in order to raise capital for its continued growth and expansion.

“Unbun has experienced explosive demand for its products and incredible growth since launch,” Gus says in a May press release. “This investment is a sign that there is a growing appetite in the market for innovative products that meet a range of dietary requirements and preferences to help support a balanced lifestyle. Unbun will continue to develop new products and ramp up production to bring our better-for-you options to even more consumers.”

While the proceeds from this private placement offering will allow Unbun Foods to increase production capacity while improving support operations, supply chain, and manufacturing infrastructure needed to meet the increasing demand for its products from restaurant partners, grocery retailers and consumers, limiting the offering to previously chosen investors was a key priority for the company.

“What are we looking for in an investor or strategic investor?” Gus asks. “We want someone that shares our vision…I want better-for-you, low-glycemic, grain-free bakery products available for every restaurant and every retailer. So our partners need to…see that as a vision and see that as the next step for the food space.”

Many small health food startup brands will certainly face the temptation to raise as much money as quickly as possible. Establishing a foothold in the increasingly competitive health and wellness industry might require the ability to scale up operations at speed. However, founders of health food brands should understand that taking their business public often comes at the risk of losing control of the founding mission and vision.

A recent study published in Harvard Business Review finds that “four out of five entrepreneurs…are forced to step down from the CEO’s post. Most are shocked when investors insist that they relinquish control, and they’re pushed out of office in ways they don’t like and well before they want to abdicate.”

In many cases, initial public offerings (IPO) allow growing brands to quickly raise capital in order to begin to expand operations. However, almost all founders of health food brands were inspired to begin their business due to personal experiences that arose from a transition to healthier diets and lifestyles. If a group of early investors in the company believed that cutting corners on ingredients or quality might increase their yearly return on investment (ROI), the founders of the company might be powerless to avoid this fundamental change that investors are demanding.

For Unbun Foods, the central vision of providing healthier, low-glycemic bread alternatives to restaurants, retailers, and individual consumers is simply non-negotiable. “It’s profitable to help people and do good,” Gus tells his potential investors. “If that is something that you are on board with…then better-for-you can be profitable.”

Unbun Foods continues to accelerate its expansion across Canada and the United States due to its high-quality products, unique marketing approach, and the astuteness of having uncovered an unmet niche in the market. Americans eat around 50 billion hamburgers each year. At the same time, there is an obvious growing demand for grain-free, keto, and sugar-free bread alternatives. The combination of these two market trends means that the potential market for Unbun’s line of products is virtually limitless.