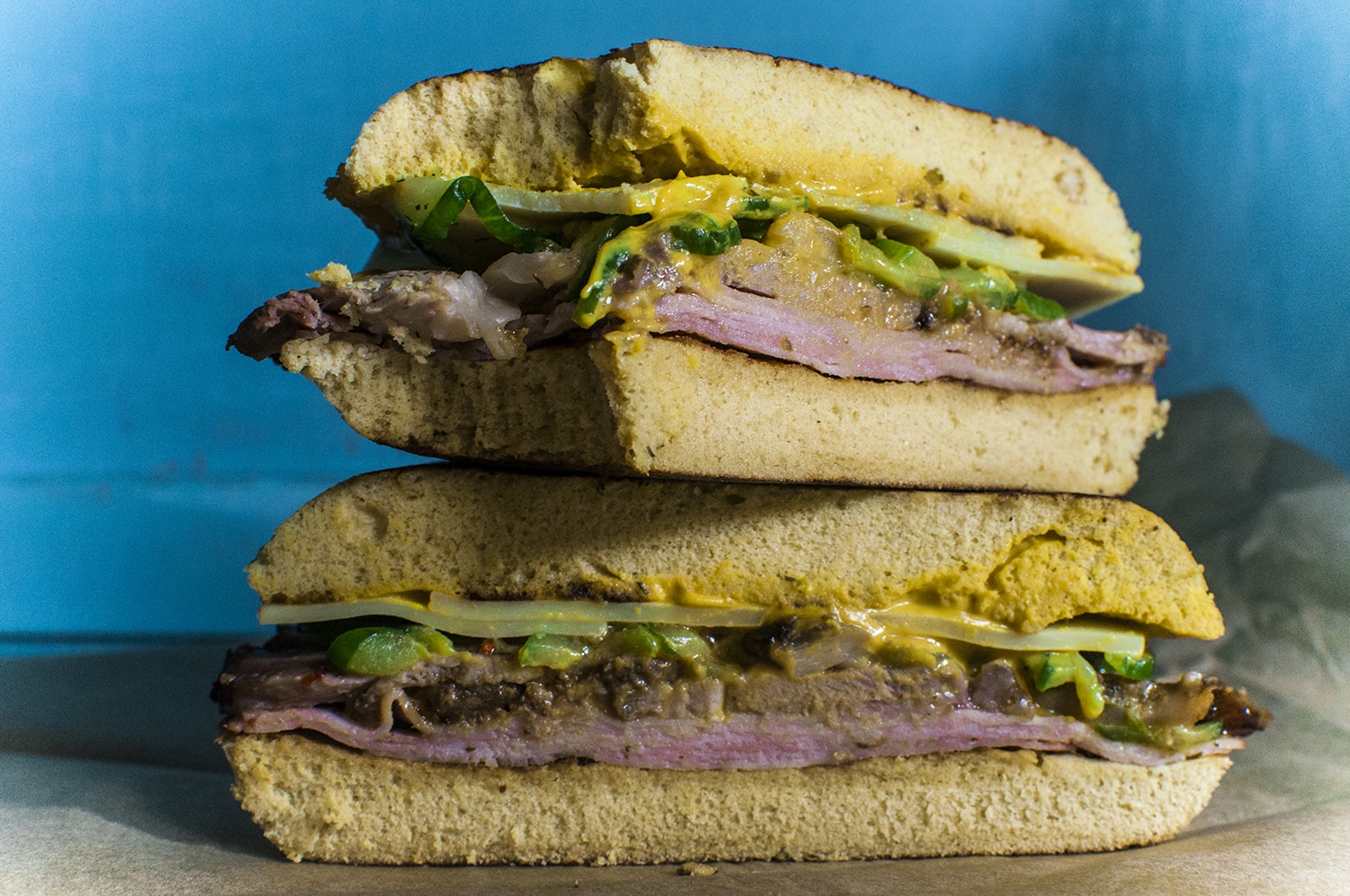 Have you ever seen the movie Chef? Have you seen the movie Burnt? Have you seen the movie Today’s Special? Have you seen The Hundred-Foot Journey? If not, you are slacking and I demand that you lock yourself in a room and binge watch EVERY one of them. As a food lover, a food blogger and a passionate cook, I adore these movies. Chef is a movie that is constantly on in the house, and Devin is absolutely sick of it! I, on the other hand, can have that movie on repeat (Hats off Jon Favreau). If you have seen the movie (SPOILER ALERT!), it is centered around a food truck that serves Cuban sandwiches, AKA the Cubano. The popularity of said sandwich shot through the roof thanks to the movie. The movie is also the inspiration behind my Paleo Chino Sandwich.

What the hell is a Chino Sandwich? It is an original creation of mine. A fusion of the traditional Cubano with an Asian twist. This fusion will probably cause Fidel Castro to be flipping in his grave… hankering for a bite! The origin of the Cuban sandwich is unknown but it is a fact that Florida played a huge role in the development of the Cubano. As historian Loy Glenn Westfall artfully puts it, the sandwich was “born in Cuba and educated in Key West”. There used to be a high population of Chinese immigrants that lived in Cuba but has dwindled since the 1980’s. So it is only natural that there should be a Cubano with some Chinese flare.

To be honest, I have never had a Cuban sandwich until recently. The recipe had been in development for a few weeks now. Devin was my guinea pig because she has spent a few years in Florida and has consumed her fair share of authentic Cubanos. She gave the thumbs up for my Paleo Chino Sandwich. Which means it is a green light to share it with you guys! Let’s make these babies! 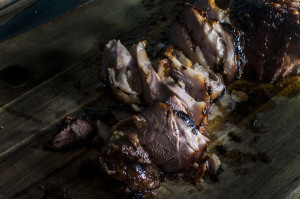 The ingredients for the Chino Sandwich is very straight forward. You would want to get a good pasture-raised pork butt. The traditional Cubano asks to trim the fat. I prefer not to. First off, pasture-raised pigs are usually leaner with a better O3/O6 profile compared to your CAFO piggies. Second, I believe fat has a flavor of its own and really helps enhance the flavor of a dish. If you do like a leaner cut of meat, go ahead and use a pork loin with similar cooking methods. Personally, I’m a butt man. The rest of the ingredients are pretty self explanatory.

Let’s start with how to make the “bun” for the Chino Sandwich. I used a wide mouth bowl that was about 5-6 inches in diameter and about 3 inches deep. You can use a soup plate or whatever you see fit. Divide the the “bread” ingredients in half, for the top and bottom of the sandwich. So, mix 2 tbsp of Cassava Flour, 2 Eggs, 1 Tsp Honey, ¼ Tsp Baking Soda, pinch of salt. Mix everything until it is smooth. Pour it in the bowl and microwave it (1500Watt, so it might vary with yours) for 2 minutes. Viola! The Top half of your bun is done. Do the same thing with the remaining ingredients and you have the bottom.

Now, we can’t have the Chino Sandwich without the roast pork. Take all of the ingredients except the pork butt and stick it in a food processor or blender. Blend everything together until it is nice and smooth. You can either pour the mixture into a large bag along with the pork butt and marinade it overnight or I chose to inject the pork butt and rub it down with the marinade because I’m not very patient. When the pork butt is ready to cook, preheat your oven to 475°F and roast the pork for 30 minutes, turn the oven down to 375ºF and roast until the internal temperature reaches 150°F, a 4lb butt was about 1½ Hours. While the pork for the Chino Sandwich is roasting, let’s make the sauce. We will finish the pork after the glaze is done. 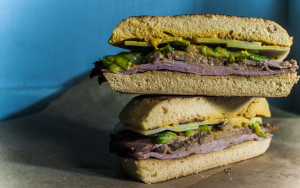 The Chino Glaze is super easy. In a sauce pan, drizzle a tbsp of Kasandrinos EVOO and slightly brown the minced garlic. Pour in the rest of the ingredients except for the Cassava flour. Bring the sauce to a simmer and allow it to cook for a minute or two. This will let all of the flavors to fully incorporate with one another. Sprinkle in the Cassava Flour, and mix it in quickly so no lumps will form. A minute or so later the glaze should thicken up nicely. Oh man, the Chino Sandwich is almost ready, I’m getting hungry writing this. For the last 30 minutes of the Pork roast, turn the oven back up to 425ºF. Generously brush on the glaze evenly all over the pork butt and put it back in the oven. Keep brushing the glaze on until a nice caramelized sauce coats the pork butt. Allow the pork to rest 15 minutes before slicing it into thin slices. Let’s assemble the Chino Sandwich.

For the Chino Sandwich, I like to to start with the mustard. I love Coleman’s Hot Mustard. Spread a good amount on on side of the bread and start layering. I like to start with a few slices of ham, than slices of roast pork, a handful of Rafs Pickles (You can definitely substitute this with store bought pickles), a slice of grass-fed Swiss cheese and top it with the other half of the bun. I spread grass-fed ghee on outside of the bun and put it in a panini press and let the bread get nice and golden brown and the Swiss cheese to lightly melt. There you have it, a Chino Sandwich. Until next time, eat up my friends!