Four Sigmatic: Believing in the Power of an Innovative Idea 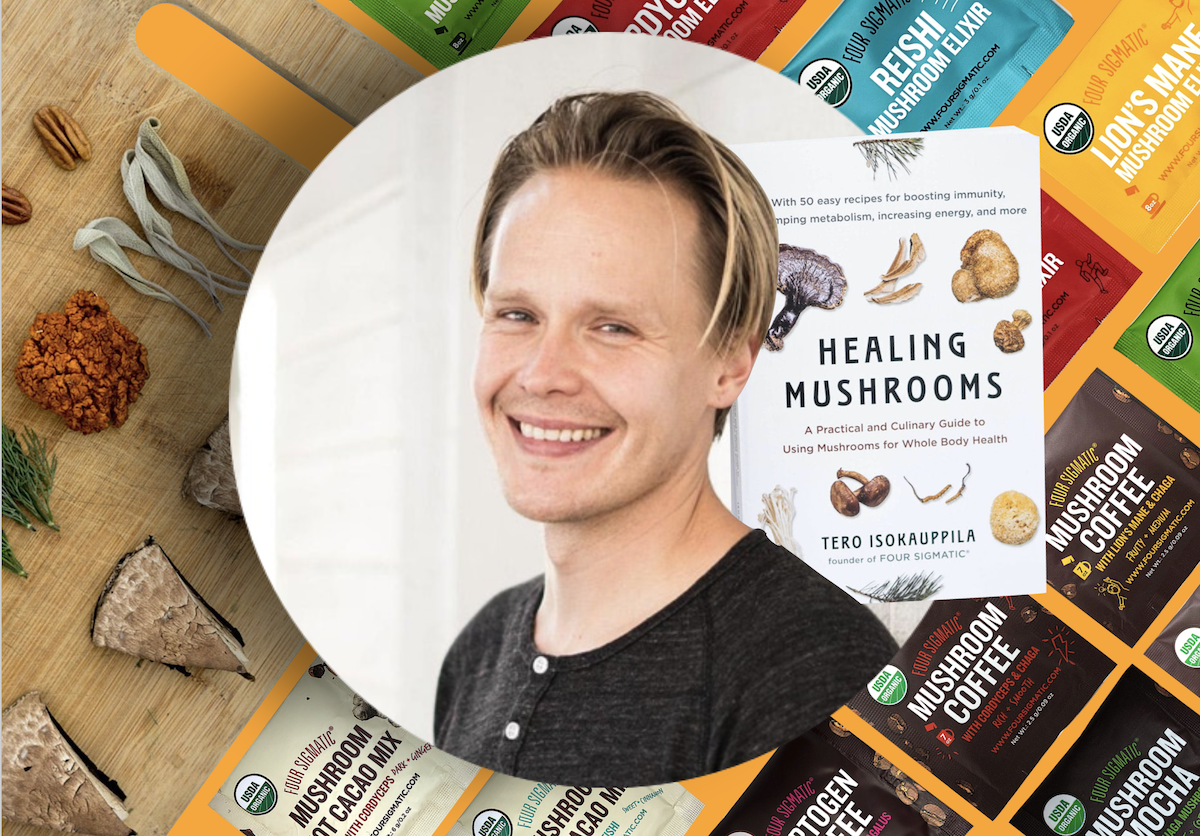 Would you believe it if we told you that one of the bestselling instant coffee mixes on Amazon is actually a coffee replacement product made mostly from dried mushrooms? Last year, in fact, an instant coffee mix made from Lion´s Mane and Chaga mushrooms actually outsold well known instant coffee products made by Starbucks, Folgers, and other well-established corporations within the larger coffee industry.  Just a decade ago, the idea of drinking a mushroom-based coffee might have been more associated with some hippy ritual at a commune in the jungles of South America rather than as a viable option to accompany your morning turmeric and blueberry smoothie.  How is it, then, that a previously unknown super-food has grown so popular that it is now competing in sales with companies like Starbucks?

Four Sigmatic is a health food brand specializing in a wide variety of functional mushroom products. The company was started in 2012 by Tero Isokauppila. Growing up on a small family farm in Finland, Tero would regularly spend time foraging through the local woods in search of wild mushrooms. This practice gave him a profound respect and appreciation for ancient, natural food traditions, and he felt that the health benefits offered by functional mushrooms was an idea whose time was ripe for adoption.

“My idea was to get the world drinking mushrooms,” Tero said in a CNBC interview, and the brand began the process of developing an impressively diverse product line of functional mushrooms made from Chaga, Cordyceps and Lion’s Mane fungi species. Over eight years later, the brand is selling over $60 million in annual revenue, outcompeting major corporations like Starbucks, and continuing to convince ever-larger segments of the population that mushrooms are not just an alternative pizza topping, but an opportunity to take your health and wellness practice to a whole new level.

A 2018 critical review on the health-promoting effects of functional mushrooms that was published in the Food Science and Human Wellness magazine concluded that “the supplementation of mushrooms as a dietary composition could become a natural adjuvant for the prevention and treatment of several health diseases.” More specifically, an article published in the International Journal of Microbiology finds that:

“Many nutraceutical properties are described in mushrooms, such as prevention or treatment of Parkinson, Alzheimer, hypertension, and high risk of stroke. They are also utilized to reduce the likelihood of cancer invasion and metastasis due to antitumoral attributes. Mushrooms act as antibacterial, immune system enhancer and cholesterol lowering agents; additionally, they are important sources of bioactive compounds.”

Despite being a fundamental part of the traditional diet and holistic medicine practices of several Asian countries, functional mushrooms were relatively unknown in the United States outside of Asian grocery stores.

Tero explains that while Portobello mushrooms might be great on pizza or as a hamburger substitute, he is much more interested in some of the other over 2.9 million species in the fungi kingdom. In a recent interview, Tero says that “mushrooms and fungi are literally everywhere – in fact, they make up at least 25% of Earth’s biomass. Mushrooms are even in our DNA (really!). Because they’re adaptogenic, meaning they work with your body as a regulator, functional mushrooms could contain a host of benefits, including reducing occasional stress, supporting immune functions, supporting cognitive and physical performance, and helping to maintain gut health.”

While the seed for the business idea originally stemmed from his childhood experience of foraging for mushrooms on his family farm, his extensive travels throughout the world exposed Tero to the incredible diversity of natural diets developed and protected by ancestral cultures around the world. Once he began experimenting with his own formulations using adaptogens and functional mushrooms, the Four Sigmatic brand was well on its way to development.

Today, Four Sigmatic sells a wide variety of functional mushroom-based products, including mushroom coffees and cacaos, edible skincare products (yes, made from mushrooms), elixirs made with a potent dose of extracted, organic mushrooms combined with herbs, and other protein blend supplements.

In a recent interview on the Awesome Office Podcast, Tero recognizes that “we´re a self-funded and employee-owned company. We didn´t look for funding…because nobody would have given it to us.  I mean, we´re selling mushrooms; telling people to drink mushrooms.”

Despite the fact that drinkable mushrooms might have not been high on the list of potentially successful companies, Tero and the folks at Four Sigmatic believed full-heartedly in their business proposal and vision. “A lot of successful businesses for a moment have been considered odd,” Tero recognizes.

According to recent research, brands that sell consumer packaged goods (CPG) often face an uphill battle when it comes to introducing new products to the market. The average American family repeatedly purchases the same 150 items. Even if individuals and families do want to make health-related changes in their diets and lifestyles, introducing a completely novel product (such as mushroom coffee or cacao) certainly takes a sound promotional strategy. This is one of the reasons why over 75 percent of all newly released consumer packaged goods and retail products fail to earn even $7.5 million in revenue during their first year after having been released.

In the case of Four Sigmatic, the first sign of widespread adoption by the public actually came by way of celebrity influencers finding the Four Sigmatic Product and offering them free publicity via their social media channels. Brands from all different industries are discovering the advantages of influencer marketing. In fact, one study found that businesses generate $6.50 in revenue for each $1 invested in influencer marketing. Four Sigmatic was lucky enough to receive free publicity and social media mentions from certain celebrities interested in healthier, organic lifestyles.

The brand also was very strategic in how they marketed their product to different types of consumers. In Europe, where tea is an everyday ritual, marketing mushroom teas simply made sense. In the U.S. market, however, most of the brand´s loyal customers actually hate mushrooms. In order to get them drinking mushrooms on a regular basis, then, the company developed their mushroom coffee mixes. “Instead of selling someone a new ritual, we sold them an upgrade to their current habit,” Tero says. By marketing their functional mushroom products as a healthier upgrade to the sacred morning coffee, Four Sigmatic was able to drastically enlarge their potential customer base.

The Importance of Creative and Attention-Grabbing Packaging

Shortly after the initial boost given to the brand by celebrity influencers, Four Sigmatic completely redesigned their packaging for their mushroom-based product line. Tero understood if Four Sigmatic was going to be successful, the company needed to grow from a fringe brand that appealed to the one percent of the population who was into alternative nutritional therapies and adaptogenic foods. “If only the one percent of health freaks use (our product) that really doesn’t change anything,” Tero recognizes. Attractive and informative packaging was going to be necessary if the average, middle-class American family was going to be willing to replace their morning coffee with a hot mushroom elixir.

We live in a visual society, and packaging is an often-overlooked and underappreciated aspect associated with the success or failure of small food brands. According to one recent study, 70 percent of consumers form their main impression of a brand due to the packaging they see, and almost a third of all businesses report increases in sales and revenue when they invest in improved packaging for their products.

“One of the absolute big moments for us in terms of general awareness (of the brand)…was actually package design-related,” Tero recognizes. “We switched the packaging…and one month in after that we won best craft design in America, competing against Jack Daniels…and all these huge names….So then I felt we might be on to something and shortly after that we had our first best-selling status on Amazon. For me, Amazon represents more of the Middle American and the average American consumer.”

Another element that helped Four Sigmatic convince the average American consumer that functional mushroom products could become a healthy and health-enhancing aspect of their daily diet routine was related to rigorous, third-party testing. According to their website, Four Sigmatic tells consumers: “We stress and obsess about the science, statistics, sourcing, and testing so you don’t have to. Every single batch of our products are tested in a third-party lab for heavy metals, allergens, bad bacteria, yeasts, molds, mycotoxins, and pesticides before they get in your hands.”

When Tero was initially experimenting with some of his own adaptogenic herbal mixes and formulas, he found that it was sometimes extremely hard to get solid information from the companies selling these products.  “I would order random powder that definitely looked like some kind of drug — it could have been easily cocaine. There was no documentation,” he says.

Four Sigmatic understood that the average consumer would be much more willing to try an innovative product such as drinkable mushrooms if the product was backed up by thorough, independent testing and certification programs. The brand publishes all of their in-depth lab reports (found here) and most of Four Sigmatic’s products are Keto Certified, USDA Organic certified, Whole 30 approved, Certified Vegan, and Certified Paleo.

Despite the fact that few people could have predicted that drinkable mushrooms would one day be competing with Starbucks for the most widely sold instant coffee mixes, the experience of Four Sigmatic goes to show that innovative product ideas can certainly be successful with the right business approach.