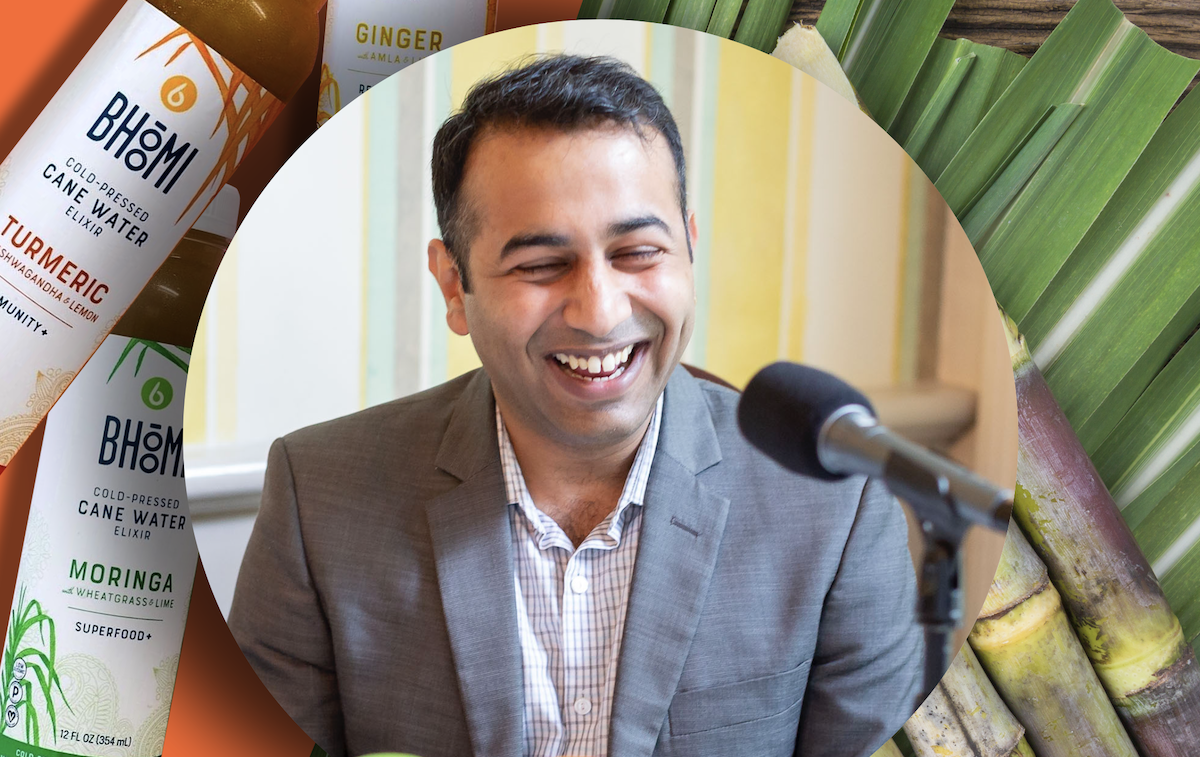 The famous American writer and one of our most inspiring environmental figures, Henry David Thoreau once wrote that “goodness is the only investment that never fails.” That bit of “Waldonian” wisdom certainly contrasts with prevailing business practices, perhaps best summed up by the free-market economist Milton Friedman who said: “There is one and only one responsibility of business: to use its resources and engage in activities designed to increase its profits.”

Today, the average consumer is slowly beginning to shift away from companies that wholeheartedly dedicate themselves to Friedman’s business ethic, and are instead supporting companies that dedicate time, resources, and energy towards promoting the goodness that Thoreau believed in.  According to one recent study, over 60 percent of young people closely consider a company’s ethical values and authenticity before buying their products.

Bhoomi Cane Water is one inspiring health food brand that has rooted its business mission and vision in healthy nourishment for its customers, ethical collaboration with its suppliers, and a profound respect for Mother Earth.

Arpit Bhopalkar, Founder and CEO of Bhoomi, grew up playing competitive table tennis in India. After intensive practice or competition, his father would take him and his brothers into the busy streets to find the nearest street vendor selling freshly-pressed, natural sugar cane juice. When Arpit moved to New Orleans to study and continue to play table tennis at Tulane University, he found that despite the enormous amount of sugar consumed by the American population, natural and minimally refined sugar cane juice was simply impossible to find.

Natural sugar cane juice has been consumed by human populations for thousands of years, with some Paleolithic populations most likely chewing on raw sugar cane since at least 8,000 BC. Sugarcane, as a type of grass, offers a healthy dose of electrolytes, vitamins, amino acids, and phytonutrients. Essentially, it offers advanced hydration without the sugars, artificial sweeteners, and other chemical additives so common in more popular sports drinks.

The brand makes what they call “cane water elixirs” that are infused with superfood herbs, including moringa, wheatgrass, lime, turmeric, ashwagandha, ginger, and lemon. Bhoomi means “Mother Earth” in the Sanskrit language, and the name adequately reflects the story of the brand. According to their website, the company is “inspired by Ayurvedic wisdom, and re-engaging in a healthy, balanced, back-and-forth between our planet and its people.”

A Brand Guided by a Unique Social Mission

Sugar cane, like many industrial crops, has a dark history.  During the colonial period, sugar cane production in the Caribbean islands and in the southern part of the United States was part of the infamous “Triangle Trade system” wherein entire communities were taken from West Africa to work as slaves on sugar cane plantations. The raw sugar cane was shipped to the American colonies before being transformed and sent back to Europe.

Despite this dark past, Bhoomi Cane Water believes that “it is within our power as an organization to re-shape the story of sugarcane as a crop within the south, so we partner with under-served farmers within our supply chain.”

Today, the company is exclusively working with minority farmers and supporting justice for the minority sugarcane farming community. According to Bhopalkar, “to be a successful sugarcane juice company, we have to re-navigate the history by supporting farmers of color who have been heavily impacted by the sugarcane industry or the sugarcane trade in the West,” said Bhopalkar.

Instead of shying away from or ignoring the history of slavery, oppression, and colonization which disenfranchised communities of color across the South, Bhoomi has instead engaged with this reality and committed to transforming the cultivation of sugar cane into a thriving industry that can help minority, African American farmers. “Building a thriving sugarcane company would be meaningless if we do not address this issue and support communities of color and most importantly African American sugarcane farmers,” the company´s website says. “As a matter of fact, there were approximately 60 black sugarcane farmers in Louisiana in 1983, but today, there are only four.”

The brand today is working closely with the few remaining minority sugar cane farmers in Louisiana.  Eddie Lewis III, one of the farmers working with Bhoomi, says that working with the company has given minority farmers more options and access to fairer prices for their crops. He says he is excited about the partnership because the brand brings creativity and motivation to an otherwise stale industry. “I really don’t trust too many people, especially in sugar country down here, Lewis says, “but this is a special relationship.” The energy, creativity, openness, and willingness to collaborate as equals has allowed Bhoomi to create a unique and empowering relationship with the African American sugar cane farmers that provide them with their raw product.

Engaging with the history of their main raw ingredient and becoming socially involved with minorities in their region has become the cornerstone of the company´s mission and business model. Instead of simply agreeing to purchase sugar cane from minority farmers, Bhoomi has tied their expected growth and success as a brand to the wellbeing of the minority farmers they collaborate with.

“We hope to be an economic incentive for the farmers that we work with, and hopefully they are going to expand along with us,” says Bhopalkar. The end goal of the company is not simply to increase its profits following from Friedman´s business logic, but rather “to work as a team with African-American farmers and help them expand as we grow. That’s the plan,” Bhopalkar affirms.

Sugar on the Paleo Diet?

One of the most ubiquitous health and nutrition-related problems in the United States is related to the amount of sugar that we consume. According to estimates by the USDA, Americans consumed almost 70 pounds of refined sugar per person in 2016.  An additional 41 pounds per person of corn-derived sweeteners (ERS) were also a fundamental part of our diet that year.  It should come as no surprise, then, that about 10.5 percent of the U.S. population suffers from diabetes while more than four out of ten American adults are obese. Reducing the amount of refined and processed sugar we consume is quickly becoming one of the most popular nutrition and diet-related goals. In fact, over two-thirds of respondents to a recent survey stated that reducing caloric intake from sugar was one of their main dietary goals.

Instead of completely cutting out the sugar from our diets, however, many health professionals recommend avoiding the highly processed and refined sugars and corn-derived sweeteners that are common in most industrially-produced food products and focusing on natural, unprocessed sugar products. Unrefined and organic cane sugar, when consumed in moderation, can offer a number of health benefits.

Robb Wolf, former research biochemist and the New York Times and Wall Street Journal best-selling author of “The Paleo Solution” and “Wired To Eat” believes that there certainly is a placed for unrefined cane sugar within the popular Paleo Diet. When asked the question: “Is sugar cane juice, or water extracted from the sugar cane by crushing, boiling, or chewing, Paleo?”, Wolf quickly responded by saying: “In my opinion, yeah, [sugar cane juice] is Paleo. Yes, it’s sugar, but it’s minimally processed, and also highly sustainable.”

Minimally processed sugar cane juice has been shown to be abundant in potassium while also containing high amounts of calcium, magnesium, iron, manganese, various amino acids, zinc, thiamin, and riboflavin. This natural juice has roots in Ayurveda practices, which claims it can strengthen liver function and act as a natural remedy for jaundice. Furthermore, the phytochemicals and pharmacological activity of natural and minimally processed sugar cane juice offers further health-enhancing benefits, as noted in The Paleo Foundation’s research paper: Can Sugar Cane Juice without Additional Refinement be Certified Paleo?

Not only is Bhoomi Certified Paleo by the Paleo Foundation, Bhoomi also mentions that their cane juice elixirs are low-glycemic. “The breakdown of complex sugars to simple sugars takes time,” the company states. “This longer time period required for full digestion of the carbs in the drink accounts for the increase in the body’s blood glucose levels over time. This increase is more tolerable for our bodies to work with to bring us back to balance – achieve glucose homeostasis.”

While the average American certainly needs to reduce the amount of processed sugar in their diet, Bhoomi Cane Water is on a mission to “reconnect humanity to balanced health, equitable economies, and regenerative practices for mother earth (through) revolutionizing sugarcane by promoting Ayurveda health benefits, partnering with minority sugarcane farmers, and working for radical positive environmental impact.”