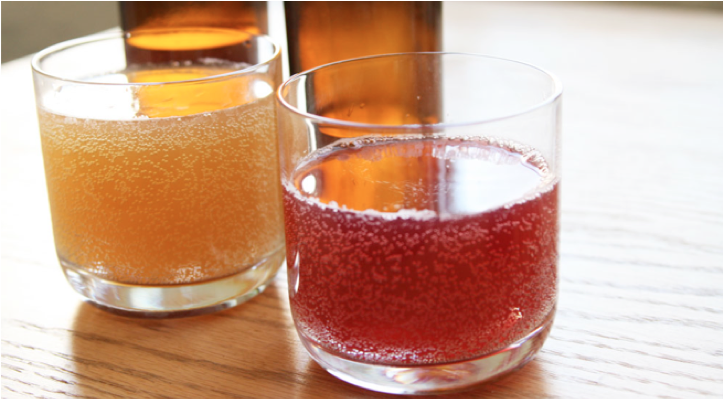 As always, it depends on who you ask. Did caveman have kombucha? Probably Not. Could caveman have made kombucha with pre-agricultural revolution ingredients? Absolutely, Does that matter?

Probably not. Just because our hunter-gatherer ancestors did or didn’t do something doesn’t make it inherently healthy, or unhealthy. What does matter is how that fits into our current lives. And with that, let’s discuss Kombucha.  Is Kombucha Paleo?

First, Kombucha is a fermented tea beverage that is often made in one’s kitchen, or sold in a few health food stores. Its history extends back to the Qin Dynasty in 220 BC, and there is evidence that Genghis Khan himself drank it for vitality and strength. Even the ancient Chinese called kombucha the “Immortal Health Elixir.”

A spokesperson for the Acadamy of Nutrition and Dietetics is quoted as saying that “[They] don’t know if it does anything at all” while other sources suggest that when the Kombucha culture consumes the sugar, it produces healthful acids like glucuronic acid, gluconic acid, butyric acid, ascorbic acid,  and even B vitamins.

Furthermore, mounting evidence suggests that many health benefits can be gained from strengthening the immune system with probiotics. The benefits of probiotics from consuming kombucha can be an essential part of a healthy dietary regimen, especially for those who suffer from digestive ailments.

How is Kombucha Made?

Kombucha is made with water, tea, sugar, and a culture of bacteria called a SCOBY (Symbiotic Colony of Bacteria and Yeast). The process for making Kombucha is relatively simple;  black, green, or white tea is sweetened with sugar, the SCOBY is added, and the tea is fermented for a week in a glass container.

During this week, the billions of bacteria and yeast in the SCOBY colony feed on the sugar and convert it into vinegar. It is either bottled after the first week or for extra carbonation; it can be fermented again.

The Paleo Conflict over Kombucha

Because Kombucha was likely not a food that was made by our Hunter Gatherer ancestors, some would surmise that it cannot be Paleo. This is where the initial conflict over the Paleo status of Kombucha lies.

Also, Kombucha is made with sugar or honey. Without sugar, the Scoby has no food to ferment, and pure sugar is the easiest to digest. However, as a result of fermentation, almost all of the sugar is converted by the culture, resulting in a vinegary brew.

Many Paleo adherents would argue that the use of sugar would make Kombucha impermissible as a “Paleo Diet” food. However, it is unmistakable that Kombucha is a source of probiotics.

It is likely for this reason that Kombucha has permeated into the Paleo Community and has become an honorary Paleo Beverage since we recognize the importance of a healthy gut flora system despite the sugar required to make it.

It is for this reason that we can give Kombucha a pass in our Paleo Friendly certification program. Because it is usually made with cane sugar, The Paleo Foundation will not, at this time, grant it Certified Paleo status.

However, once a year, we reassess our standards to include, or remove items allowed in our certification process. Who knows, with more information Kombucha may fall out of favor within the Paleo Community. As with the evolution of anything, including our movement, our conclusions are subject to change.

Our ‘Final Answer’ on Kombucha:

Although members of the Paleo Foundation have concluded that Kombucha, even made with sugar, is Paleo, Kombucha is considered to be in the gray area throughout the worldwide Paleo Community. It is for this reason that The Paleo Foundation has taken the following stance on Kombucha: