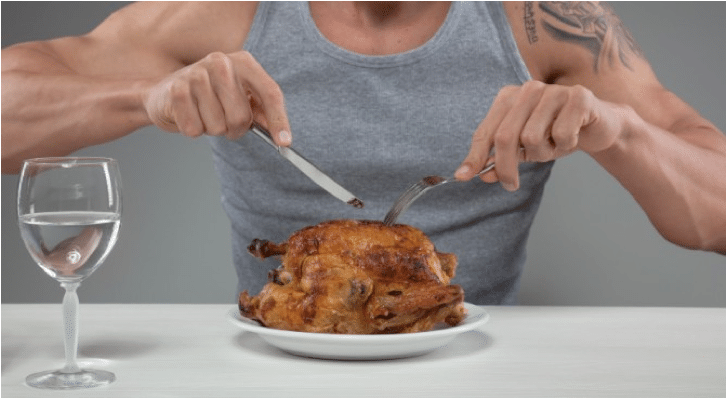 I never planned to go 15 days with less than 50g carbs, it just sort of happened. Honestly, it was out of convenience that I had this low carb bodybuilding experience, actually. I had things going on and simplifying my diet made my life easier, which translates to less food prep, less time in the kitchen, and less food cleanup!

The first few days were easy. But working in my favor were many factors. Among them, I’m no stranger to a ketogenic diet as a Paleo athlete. In fact, I’ve done contest prep for bodybuilding on a strict ketogenic diet before as an experiment. Further, my experience competing has tested and hardened my commitment and discipline with diet.

I know my strengths, weaknesses, and triggers. I found myself feeling strong and decided I wanted to continue past a few days to ensure my glycogen levels were depleted, and then in I’d experiment with a carb load.

What I expected to happen was that I’d lose body fat by purposely tapping into my fat reserves, to eventually have a “flat” muscular look because of the depleted glycogen levels, and THEN I wanted to experiment with reintroducing carbs in a “loading” fashion to see how much my weight would fluctuate and how “full” my muscles would show. Bodybuilders have to learn to peak at the right moment on stage, so this was an opportunity to practice.

My current hypothesis about my body is that my ability to synthesize carbohydrates is higher than others and even higher than even I had imagined. Therefore, I wanted to deplete, and then reintroduce an even greater load of carbohydrates to fully fill glycogen levels. Basically, I wanted to see how “full” my muscles would get if I introduced even MORE carbs than I’ve ever loaded with.

If you know me, you have to realize I’m a different breed. When it comes to my ideas, I dig my heels in the ground and practice what I preach. I don’t believe in knowingly participating or promoting any unhealthy or irresponsible methods regarding health and fitness.

For me, that especially means not obsessing about food. It’s the worst and most dangerous aspect of being a fitness competitor that no one wants to talk about. Seriously, don’t be jealous of fitness competitors. Most are set up for future body and health failure.

The Conditions of “Strict” Low-carb Bodybuilding:

*I know by now most carbs and their stats by sight, so I didn’t need to chart numbers so low. I didn’t bother calculating carbs. I also didn’t measure protein other than making sure I was getting my daily and maybe a little extra, as well as upping my healthy fat intake. I DIDN’T COUNT CALORIES, EVER.

*I was going to cut strictly with my regular routine. Just regular training, which means for me… NO CARDIO. So I trained normally without any cardio sessions in pursuit of specific fat loss.

*I set my “number” at 50g of carbs/day with the intent to not purposely worry about inserting carbs into my diet. I had permission to eat lots of veggies, I could have fruit or juice. I basically gave myself permission to use condiments or have a small portion of whatever carbs, should I desire.

*I did use protein shakes. I’m a bodybuilder and have higher needs and it helps, but are they for everyone?? Nope. Further, I began adding a tbsp of coconut oil to my shakes to increase calories and satiety. Protein shakes normally leave me hungry after an hour.

*I eat by my lifestyle. I plan and prepare meals when I can. But my meals per day usually range from 4-6. Unless it’s competition prep time, I embrace NOT being strict, and that this is a choice and not a responsibility. So simply put, I’m not doing anything I mind doing.

*Foods I relied on: almonds, green veggies (I could do a better job eating veggies, most of us could), AVOCADO (learned to love as an adult, great source of healthy fats!!), and I did purposely take in tbsp of coconut oil in my shakes.

*I wouldn’t allow this experiment to become a negative experience. For what?? Why? With this in mind, I even took two days off in a row from the gym. I also didn’t focus on measuring foods out. Ballparking was easy for me with my bodybuilding experience and I had built in “cheats” as far as the ability to say “yes” to carbs. Probably 10/14 days I was under 30g carbs and the rest closer to that 50. Which for me, is NOTHING.

*My diet is Paleo but I have my cheats from time. For this experiment, however, I was as Paleo as possible so no grains, dairy, or legumes during these 15 days for anyone unfamiliar. While my choices were Paleo, my food selections were not always “wild caught, cage-free, organic.” We all make the best choices we can. No “off Paleo” cheats, though.

*This experience was a pleasant reminder, “Hey, let’s eat bacon.” Yet again, I cut bodyfat drastically while consuming bacon as I do before EVERY bodybuilding contest now.

What Happened By the End of my Low-Carb Bodybuilding Experience?

Well, I’m normally a guy who trains intensely 5-6 days a week for about 2 hours and gets stronger the second hour of a workout. Did that continue? Initially. The first few days were a piece of cake, no problem. Towards the end of the first week, I did give in to lighter weights with more control and “feel.” I enjoy this style of training, so no biggie.

The first week passed and eating low carb was no problem, but I did find myself cutting my workouts a little shorter than 2 hours. No shame there, I was still doing great. I took the 6th and 7th day off from the gym entirely to rest my body. I’m human and I was a little tired, so I listened to my body.

I was also losing weight. It was body fat. Lots of it and fast! I was making sure to keep my protein intake high, giving my body all it needed to maintain and repair muscle. But as I lost body fat and remained low carb my workout performance diminished, but was still insane. Just not for 2 hours. I could lift a lot, just not my best. But my body was progressing visibly from day to day.

Using this motivation, it was easier for me to get from Day 7 to Day 10 and to Day 15 when sure, I had a few cravings. (Neighbors always seem to cook food that smells better than your own, right??) But I’m used to those moments, endured, and eventually became more focused upon having an OCD moment and thinking, “I have to stop at a good number. 10? 14?”

And then it was over.

Just like that, my low carb journey ended. Without any preparation or fanfare, I decided the 15th day was enough. I remember it just felt like my body does when I’m depleted, and almost ready to compete onstage. That’s when my bodyfat is LOW! We’re talking around 6% or below. I’d proven myself and my point. I had reached my “point” where it had become a burden to stay so low on both carbs and body fat, to train, and to continue my daily routine.

After my workout, I would reintroduce carbs. Right after I stopped by the store and bought them! (Duh, don’t keep stuff in the house you don’t want to eat! I follow these tips too!)

During the 15 days, I didn’t keep track of my bodyfat measurements to “prove” progress. This wasn’t supposed to be “official,” which I believe played a hand in making it easier and less of a responsibility. I did lose 12 lb and my experience with bodybuilding has me feeling that I did a pretty good job of maintaining all my muscle.

Yes, after 15 days I was “flat,” as expected, and some of the weight loss is water loss due to depleted glycogen levels. Upon mass carb reintroduction, I did put back on 3-4lb in 2 days as glycogen levels refilled and pulled in water as well. Five days later I was up to six pounds back on.

So how would I explain my 12 lb weight loss? I’d say some of the was definitely water loss. Not from water depletion but because my glycogen stores were empty, which also draw water into the muscle. But the majority of the weight I believe was genuine fat loss. And by the majority, I mean probably around 75% or about 9 lb.

So, that’s my experience. Kinda interesting being Paleo and a pro natural bodybuilder. My body is truly a constant science experiment. As is yours. Learn it and…

“EVOLVE INTO YOUR STRONGEST YOU!”