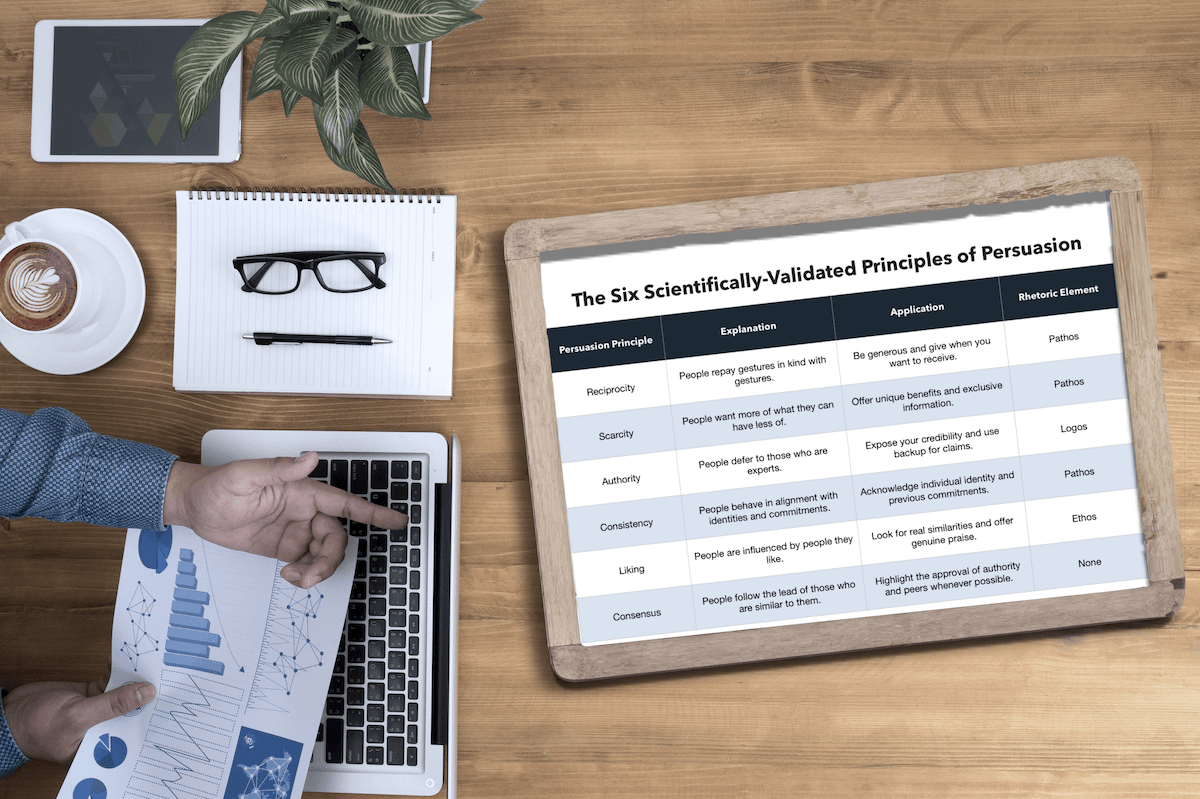 In our increasingly overloaded lives, we are bombarded with advertisements, sales pitches, commercials, and noise. Now, more than ever before in history, do we find that we need mental shortcuts, or rules-of-thumb to help guide our decision-making processes in an endless sea of choices. For decades, researchers have been studying these mental shortcuts that have influenced our behavior, allowing us to be persuaded to comply with the requests of others. While we may believe that we consider all available information when we make decisions, science, surprisingly, shows us that this couldn’t be further from the truth. Behavioral research over the last 60 years has provided us with insight into the universal “shortcuts” that can guide human behavior. In this article, we will discuss the 6 Universal Principles of Persuasion as outlined by Dr. Robert Cialdini, Professor Emeritus of marketing, business, and psychology at Stanford University, and author of New York Times Bestseller Influence: The Psychology of Persuasion.  First published in 1984, Influence has sold millions of copies and is still widely regarded as the go-to text on the subject of persuasion principles.

Cialdini spent his entire career studying the science and principles of persuasion. According to Cialdini, over the past 60 years, behavioral research has identified just 6 Universal Principles of Persuasion that guide human behavior. They are:

Understanding these shortcuts and employing them can significantly increase the likelihood that someone will be persuaded by your request, especially if that request is to get someone to buy your brand in a grocery store setting with thousands of products. In other words, knowing these six universal principles of persuasion is critical to your business success, and can make or break your success as a food brand.

The 6 Scientifically-Validated Principles of Persuasion

Reciprocity is the concept that people feel obligated to return a kindness to others in the form of a behavior, gift, or service which they received from another first. For example, if a friend invites you to their wedding and you give them a financial gift, that friend will later feel an obligation to give you a gift at your wedding. Or, if a colleague does you a favor, then you may experience the feeling that you owe that colleague a favor, and feel a sense of obligation to return the favor when asked. Like the “‘tit-for-tat” rule, science shows that people are more likely to say ‘yes’ to the people they owe. This is the very definition of the social rule and principle of reciprocity.

One series of studies were conducted to discover the influence of gifts in a restaurant setting show the Principle of Reciprocity in action in an astonishing way. One study found that giving patrons a mint at the end of a meal was likely to increase tips by 3%. You may have expected that if the waiter gave the patrons a gift of two mints, the tips would have doubled. However, tips were found to quadruple— and a 14% increase in tips was found. And, if the waiter initially gave the patrons a mint, began to walk away, and then turned back to give an additional mint saying, “For you nice people, here’s another mint,” tips saw a 23% increase.

What’s the lesson here? Reciprocity is influential in the decision to increase tips, and giving a gift that is personalized and unexpected is even more effective.

Simply put, people want more of those things they can have less of. When British Airways announced in 2003 that they would no longer be operating the twice-daily London—New York Concorde flight because it had become uneconomical to run, sales the very next day took off.

Notice that nothing had changed about the Concorde itself. It certainly didn’t fly any faster, the service didn’t suddenly get better, and the airfare didn’t drop. It had merely become a scarce resource. And as a result, people wanted it more. So when it comes to effectively persuading others using the Scarcity Principle, the science is precise. It’s not enough to tell people about the benefits they’ll gain if they choose your products and services. You’ll also need to point out what is unique about your proposition and what they stand to lose if they fail to consider your proposal.

The Authority Principle of persuasion is the idea that people follow the lead of credibility.

For example, science shows that Physiotherapists can increase the compliance rates of exercise with their patients if they prominently displayed their medical diplomas on the walls of their offices. It also showed that people were more likely to give change to a complete stranger to pay a parking meter if the requester was wearing a uniform rather than casual clothing. And, it showed that customers who were transferred to real estate agents by secretaries who mentioned their title and years of experience in the field led to a 20% increase in the number of appointments made, and a 15% increase in the number in signed contracts.

In other words, signaling to others that you are a competent, credible authority will influence the outcomes of your request either for patient compliance, change for a parking meter, and sales.

Of course, if you have a food brand, going around and telling potential customers how brilliant you are, or how much better your product is than your competitors can also backfire. However, you can arrange for another party to do this for you. It can be in the form of a medical degree from a university, a testimonial from a satisfied customer, a post from an influencer, and even certification from a third-party organization like the Paleo Foundation.

Is it any wonder that studies conducted by our partners at SPINS.COM found that certified products in a high-growth market position saw an average 285% increase in sales more than their competitors in the same market position in 2017?

Like James Clear outlined in his book Atomic Habits, people like to be consistent with their identities, and with the things they have previously said or done.

In one famous set of studies, behavioral researchers found that very few people were willing to participate in a campaign to erect unsightly signage in their front law urging drivers to drive safely in their neighborhoods. Conversely, in a nearby community, neighbors had agreed to place a small postcard in the front window of their homes to show their support for the Drive Safely initiative. However, when the neighbors who had placed the postcard in their windows were asked to erect the same ugly billboard, there was a 400% increase in their commitment. Four times more people were persuaded to say ‘yes,’ punctuating the power of the Consistency Principle.

Another example of the Consistency Principle was shown in a study that indicated that having patients rather than the staff to write down the appointment details on a future appointment card reduced missed appointments by 18%.

It may seem quite commonsensical, but people prefer to say ‘yes’ to people that they like. Unfortunately, it can be difficult to get others to like you, but the science of persuasion and human behavior find that three important factors influence our ‘liking’ of another. These include liking those who pay us compliments (flattery will get you everywhere), people who cooperate with us toward mutual goals, and people who share similarities with us.

In a series of negotiation studies carried out between MBA students at two well-known business schools, one group was told, “Time is money. Get straight down to business.” In this group, around 55% were able to agree. Conversely, the other group was instructed “Before you begin negotiating, exchange some personal information with each other. Identify a similarity you share in common then begin negotiating.” In this group, 90% of the student pairs were able to come to successful and agreeable outcomes.

So to harness the Liking Principle of persuasion, it is important to look for areas of similarity and offer genuine compliments before you get down to business. This principle can be especially useful in a fast-paced, online world.

People look to others for cues on how to behave, especially during times of uncertainty. Also known as the “Social Proof” Principle.

You may have been to a hotel recently and seen a hotel card in the bathroom that is attempting to persuade hotel guests to reuse towels and bed linens. Most do this with emotional pleas such as “Help us Save The Planet” or “Help Us Protect the Environment” or even “Save Mother Earth!” This strategy leads to about 35% compliance.

In short, changing just a few words to indicate what similar guests had done in the same room was the most effective messaging, resulting in the greatest increases in reuse for the hotel study. What the behavior science indicates is that rather than relying on our own ability to persuade others using environmental pleas, its more effective to persuade others why pointing out what others are doing.

These 6 Principles of Persuasion are Vital to your Success

Bestselling author of “The $100 Startup” Chris Guillebeau argues that marketing is fundamentally about the principles of persuasion, and that learning to structure all of your campaigns and tactics around reassuring customers concerns while getting them excited about your product or service is critical to the success of a brand.

The effectiveness of third-party certification (Certified Paleo, Keto Certified, and Grain-Free Gluten-Free Certification) by the Paleo Foundation are owed to both the Authority Principle, and the Liking Principle.

Certified Paleo and Keto Certified also work on the Liking Principle of Persuasion. Certified Paleo and Keto Certified use specific language, which signals as a unifying callout to members of the Paleo and Keto food tribes. Food Tribes are defined as any group of people who are connected to one another through leaders, members, and ideas. For millennia, humans have sought out tribes. Many have formed to be ethnic, religious, political — even musical. Tribes are a part of human nature, sharing similarities and connections. Thus, appealing to these food tribes is a function of a facet of the Liking Principle, known as psychological kinship.

And finally, here’s a great example of the Consensus Principle of Persuasion in action:

With Paleo Foundation brands seeing a 285% average sales increase more than non-certified brands, it’s no wonder hundreds of brands like yours have trusted the Paleo Foundation for their Grain-Free, Paleo, and Keto Certification.