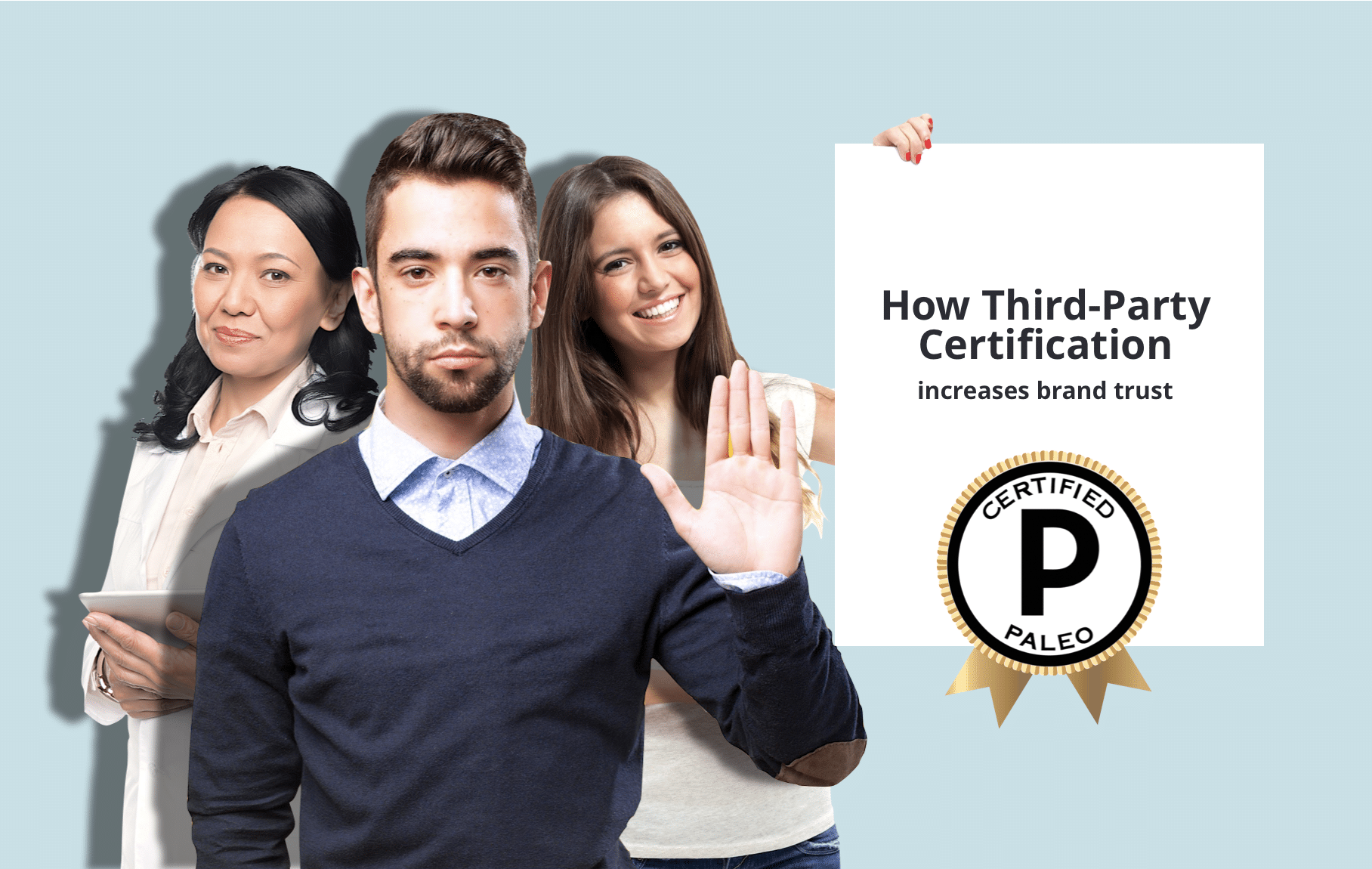 According to Nielsen’s Global Health & Wellness Survey, 44% or nearly half of the people in the United States and Canada distrust what manufacturers claim on their food labels.  For this reason alone, it is apparent that food manufacturers would benefit from the increased trust in their products.  Luckily, that’s exactly what third-party certification organizations like the Paleo Foundation offer.  Third-party certification is an effective way for brands to increase consumer trust, confidence, and sales because of offering enhanced transparency, enhanced believability of on-package claims, social proof from an impartial organization upholding universal standards, and the best product differentiation strategy according to research, bar none.

What is a Third-Party Certification Organization?

Third Party Certification Organizations offer certification or a procedure by which an impartial third party gives written assurance that a product, process, or service has confirmed to certain predetermined, written standards.   As a certification organization, they must conduct an investigation, inspection, or audit to ensure that the food product meets the criteria outlined in the standards.  The organization must also have no direct financial interest in the relationship between the supplier and the buyer to maintain ethics, impartiality, and integrity of the standards.

The third-party certification organization also issues a certificate, logos, and permission to bear the certification logos that signify compliance to consumers, retailers, and industry regulators alike.   In that sense, certification is a medium of communication that a brand has successfully adhered to a set of quality standards throughout the supply chain. Further, the certificate issued by the certifier substantiates the product claims of the supplier, which is more convincing than if the supplier only provided the claims themselves.

2nd Party Certification: An example of Second-party certification may be when a company creates its own definition for clients that they produce for. “My product is Paleo, Grain Free, and Keto Friendly because I meet the criteria defined by the co-packer that produces my products.”

Because certification is provided by a party that independently develops and verifies standards and no direct financial interest in the relationship between the supplier and the buyer exists, it reduces the conflict of interest, thereby enhancing the believability of claims.  In other words, certification claims can only be made based on merit alone, while the potential for other types of claims may appear to be misleading and less trustworthy in the minds of the consumer than others due to conflicts of interest.   This is likely the reason why research has shown that  third-party certification is the fastest and most effective way to increase trust because it offers a stronger form of trust signaling than first-party and second-party claims.

Social Proof, or informational social influence, is a powerful psychological and social phenomenon that is a primary driver not only of our trust but also our buying habits.   Smart marketers know that leveraging social proof is the most effective marketing tactic for easing the minds of distrusting customers, and food certification is a method of social proofing that establishes credibility and trustworthiness in a way that other claim makers simply cannot.

Social proof is a term coined by Rober Cialdini in his 1984 book, Influence, which describes a psychological and social phenomenon where people are influenced by a third-party entity to take a specific action.  Social proof occurs most often when a person is in a situation where they are uncertain of what to do or what to buy and looks for clues from third-party influences to sway their decision-making processes.

Essentially, social proof functions by borrowing third-party influence to sway potential customers by increasing trust in a product or service.  The use of third-party social proof influence is a well-known approach in marketing that is used to increase the effectiveness of product packaging, ads, and sales pitches.  Social proof is widely used in marketing strategies and consistently appears on a short list of proven persuasion tactics. Social proof marketing through third-party brand certification is effective because it helps ease the mind of the worried consumer quickly and effectively, reducing consumer decision friction.

Examples of Social Proof in Action

•  If you saw a testimonial from an industry expert you respect and made a purchase or used a service because of that testimonial, you were influenced by social proof.

• If you looked at the price of a product or service and felt it was out of your price range, but then saw a business you were familiar with using it and continued to consider it anyway, you were influenced by social proof.

• If you signed up for a service because you saw that it solved the same problem that you are facing for a similar company, you were influenced by social proof.

• If you saw the Certified Paleo or Keto Certified logo and bought an unknown product from an unknown brand because you’ve had good experiences in the past with products bearing the logos, you were influenced by social proof.

• If you saw the Certified Paleo or Keto Certified logo on a product and stopped to consider purchasing it simply because you recognized the logos, you were influenced by social proof.

• Choosing one brand over another similar brand despite the price difference, because of brand certification, is a function of being influenced by social proof.

If you chose that brand again in the future because you had good experiences, this is no longer a function of social proof.  This is a function of brand loyalty and a reduction in consumer decision friction which every brand should strive for.  But the stage that preempts brand loyalty is the stage where you get a consumer to buy your brand over another. This is the most important and underestimated function of third-party certification because it helps consumers choose you first, and faster, at that critical stage.  That is why the average sales growth of certified products (466% ) outperformed the sales of uncertified but similar paleo-positioned products (181%) by a magnitude of 255% in 2017 according to an intelligence report by our partners at SPINS.com.

This isn’t a fluke.  This is human psychology.

Third-Party Certification from the Paleo Foundation

Like most third-party certification companies, the Paleo Foundation offers various brand certification programs to help increase consumer trust, confidence, and sales because of increased transparency, the believability of on-package claims, product differentiation strategies, and social proof.  However, because the Grain-Free, Paleo, and Keto certification programs are geared toward their respective food tribes, they have an enhanced trust-signaling power over more traditional food certifications.   This trust signaling enhancement differs from most food certifications and further reduces consumer decision friction because of the “Food Tribe Heuristic,” a form of the psychological kinship phenomenon.

With both “food tribalism” on the rise and driving the new trends for healthier, more transparent, ‘clean’ foods,  smart brands of all sizes would do their best to consider the benefits of third-party certifications that are either improving trust signaling and transparency or are aligned with these growing food tribalist demographics. 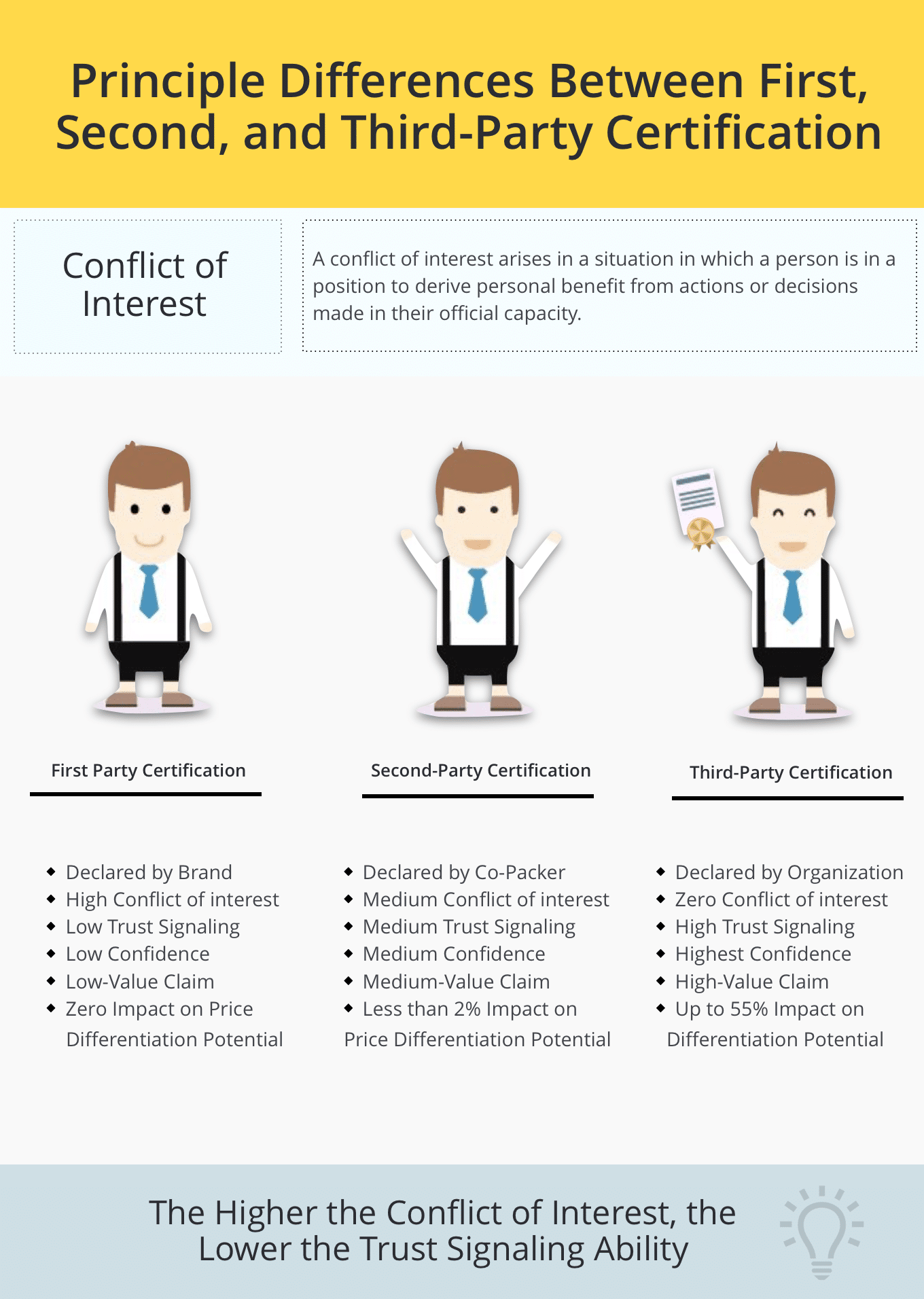 Is Keto certification worth it?