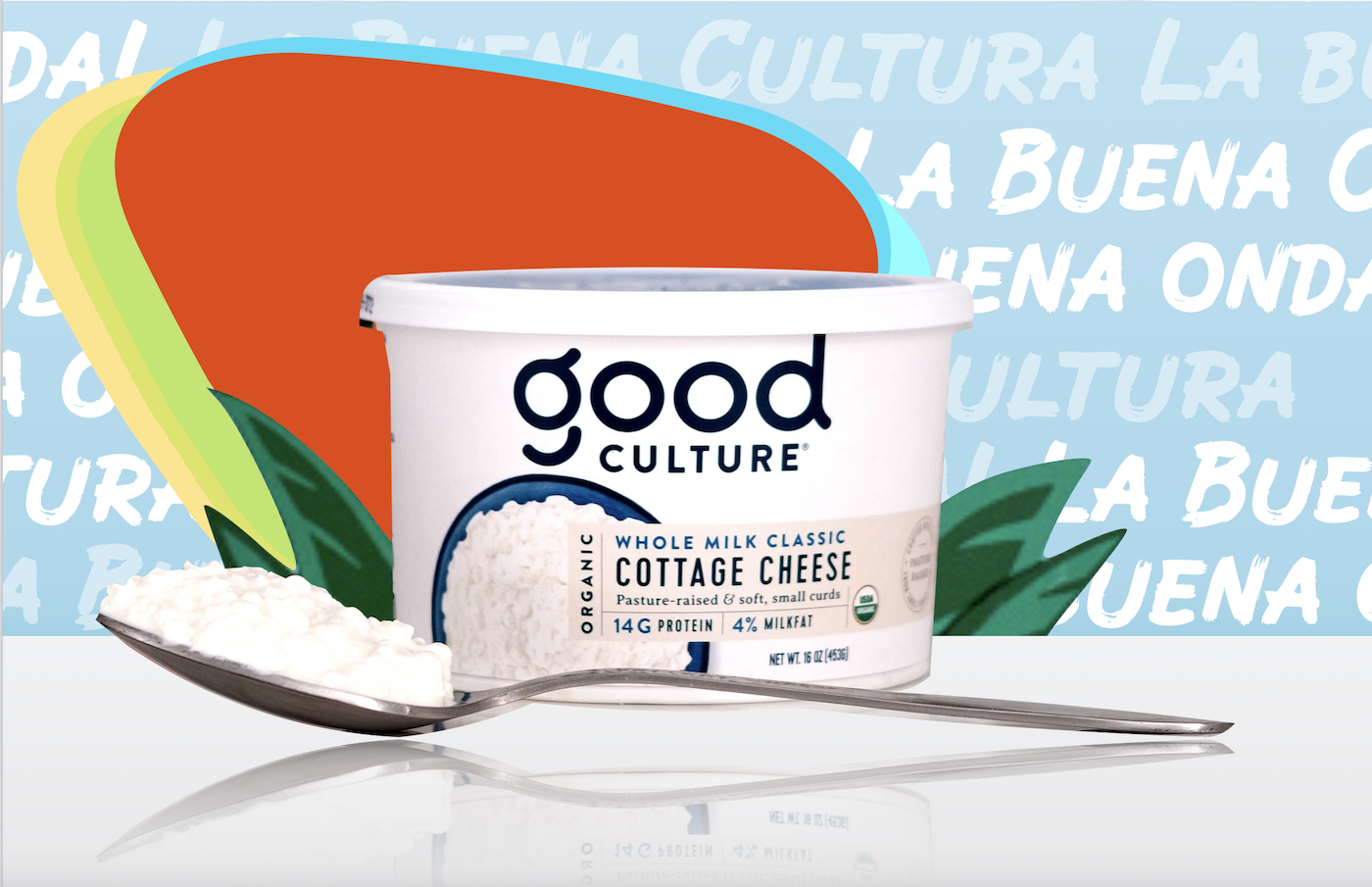 When most of us think about superfoods, we probably conjure up images of exotic, tropical crops like the Brazilian Acai or the Moringa tree. To improve our overall gut health, our kitchens and refrigerators are most likely loaded with yogurt, Kombucha, and kimchi fermenting away.  Cottage cheese, on the other hand, most likely reminds us of the slimy side dish that our grandmother served as part of those family dinners. Despite not being widely considered an integral part of the health food market, the cottage cheese industry garners an annual revenue that tops $1 billion dollars. Each year, more than 162 million Americans consume cottage cheese, with over 31 million pounds being produced each and every month in the United States alone.

Good Culture is a food brand launched in 2015 that is seeking to transform the way the average consumer understands cottage cheese. According to Anders Eisner and Jesse Merril, co-founders of Good Culture, “being active guys ourselves, cottage cheese has long been one of our high-protein go-to’s. But it was always a challenge to find a quality cottage cheese that wasn’t loaded with bad stuff and grandma’s watery curd just wasn’t cutting it.”

Despite the fact that a tub of cottage cheese is not on the grocery lists of many consumers interested in healthy, organic, and natural foods, Good Culture has exploded onto the health food scene. In their first three years after launching, Good Culture could be found in over 10,000 retail stores, including Whole Foods, Sprouts, Target, Walmart, Kroger, ShopRite, Stop & Shop, Giant. Between 2017 and 2018, the company grew over 300 percent and continues to show solid growth statistics.

Jesse Merril, one of the founders of Good Culture along with Anders Eisner, recently said in an article published in Forbes:

“Good Culture has experienced fast growth since launching. We are in close to 10K doors including Whole Foods, Sprouts, Target, Walmart, Kroger, ShopRite, Stop & Shop, Giant, and more now and grew 300% last year vs. the prior year. It is so exciting to shake up a stale category with innovation that resonates, while making real food that heals, more accessible. We are expecting sales to exceed 100% growth again this year. In 5 years, we hope to be a category leader that is playing across several adjacent categories.”

So how exactly has Good Culture cottage cheese reinvigorated an industry that was stagnant, unexciting, and apparently incapable of innovation?

A Healthy Upgrade on a Common Food Item

One tendency in the health food industry is to offer consumers a smorgasbord of food products and supplements made from unfamiliar superfoods from around the world.  A quick search for these types of foods on Amazon will allow you to purchase spirulina from Asia, Black Maca root from the Peruvian Andes, and dried Moringa powder from Chiapas, Mexico. Certainly, one of the benefits of our globalized society is greater access to some of these culinary treasures cared for by diverse cultures from around the world.  However, food brands need to realize that not every consumer interested in healthier lifestyles is going to want to fill their kitchen cupboards with food products they can’t quite pronounce, let alone know how to cook.

When the common shopper heads to the grocery store once a week, they most likely have a list of common items that are recurrent weekly purchases. For the average American consumers, milk, eggs, and butter are much more likely to be purchased than Reishi mushroom flakes or Chia seeds. Unfortunately, the vast majority of the common food items that people purchase on a weekly basis are supplied mostly by the industrial food corporations that dominate the industry. The Dairy Farmers of America, for example, controls almost 30 percent of all raw milk produced in the U.S., and Dean Foods, a mega food corporation, sells 12 percent of all fluid milk in the United States. While there have been limited transitions towards healthier products within the industrial food system, most of the larger producers, manufacturers, and distributors continue to fill supermarket shelves with unhealthy, chemically-laced food products that maximize their “bottom line.”

Unless families own their own dairy cow and know how to allow raw milk to “clabber”, the only cottage cheese products available for purchase at the grocery store are filled with several additives and chemical preservatives.  Studies have found that these common food preservatives have been linked to the obesity epidemic, inflammatory bowel diseases, and metabolic disorders.

According to Merril, Good Culture believes that “inflammation is the root cause of all disease in the body, so we are very firm about not using these types of ingredients. I’m a big believer in food as medicine.” Their cottage cheese products are completely free from all additives including stabilizers, thickeners, and other artificial preservatives. They source their dairy from pasture-raised cattle and are committed to delivering high protein, organic, and non-GMO ingredients.

Recent polls have found that over 84 percent of American consumers determined that it was reasonable to pay more for healthier food options. The problem, of course, is that there are simply not healthier alternatives for many of the common food items that we purchase on a weekly basis. Good Culture offers an inspiring example of how food brands can breathe new life and innovation into common food products through offering healthier, more natural foods that consumers demand and for which they are willing to pay more.  They currently market several food products through diverse retailers.  Good Culture Keto Certified products include:

Over 58 percent of Americans rely on milk and other dairy products as a primary source of protein in their everyday diets. The cattle and dairy industry, like most aspects of our food system, have been dominated by massive agricultural corporations. In the specific case of dairy cows, one study finds that “the number of dairy cows on factory farms doubled, and the average-sized dairy factory farm increased by half, between 1997 and 2012. The number of dairy cows on factory farms with more than 500-head rose 120.9 percent from 2.5 million cows in 1997 to 5.6 million in 2012.”

Cattle feedlots and dairy operations that confine cattle to small stalls, besides being inhumane and unnatural, also contribute an enormous amount of greenhouse gas emissions and other environmental contamination. Due to overcrowded operations, many massive dairy producers also pump cows full of antibiotics and growth hormones that contaminate milk products. Growth hormones in dairy cattle have been linked to changes in endocrine function, among other adverse health effects.

While some health food activists advocate for vegan diets that completely cut out animal-based food products, responsible and small scale animal husbandry can play an important role in healthy diets that contribute to the ecological restoration of ecosystems. Regenerative grazing practices based on rotating dairy cattle through small scale paddocks mimics the movement of large herbivores over savannah-style ecosystems. This holistic livestock management practice has been shown to be able to reverse desertification, capture enormous amounts of carbon, and restore soil health. Cattle raised on pasture are also healthier and happier, and their dairy products are higher in protein and free from some of the chemical and antibiotic residues so common in industrially raised animals.

Merril goes on to say that “Good Culture would never source milk from confined animals. We only source milk from pasture-raised animals that roam free on pasture. Ninety-percent of U.S. dairy cows are confined. They have just enough room to stand and sit and are unable to perform even the most basic natural behaviors. Good Culture is NOT okay with that! We respect our animals and will continue to fight to ensure the humane treatment of animals.”

Despite a lot of media attention, only about 2 percent of Americans identify as vegans. For food brands that are looking to establish a solid customer base, meat and dairy products continue to be staples for a much larger segment of the population. Finding dairy products that are sourced from pasture-raised dairy cattle, however, can be a challenge for consumers in some markets. Sales of grass-fed organic dairy products grew 56 percent in 2018 alone, and consumers across the country will most likely continue to push the growth of this segment of the industry.

Food brands looking to establish a foothold in the healthy dairy industry would do well to follow the example of Good Culture. Adding an innovating twist to common food staples and developing relationships with small scale producers that can deliver pasture-raised, organic raw milk have been two of the keys that have driven their dynamic growth.